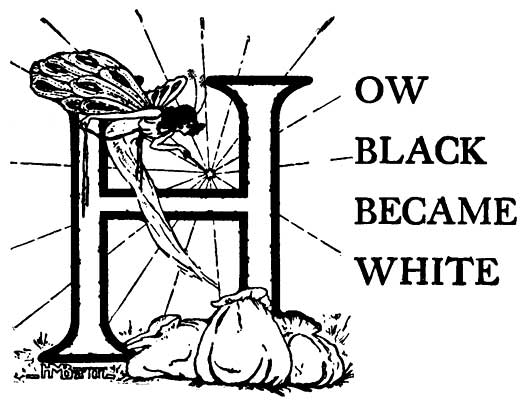 One often hears the saying that one cannot make black white or white black. I said something about it once upon a time to my Brazilian ama and she stared at me in surprise. “O, yes, one can,” she said. “It happened once and no one can ever tell but that it may happen again. Perhaps the Senhora has not heard the story?” I begged her to tell me the story and this is the tale:

Once upon a time there was a little old woman who lived all alone with her little black son who was just as black as black can be. The little old woman had not always lived alone with the little black boy. She had once been the mother of three beautiful daughters, the very loveliest maidens in all the country round. They were so handsome that they attracted the attention of the wicked fairy who lived in an enchanted castle nearby, and this fairy had been very jealous of them. By the aid of magic she tied them up in sacks which could be opened only by burning the sacks over a fire built from magic wood. The little old woman and her little black son searched long and diligently for magic wood, but they were never able to find any.

One day the little old woman took her big water jar upon her head and carried it down to the stream to fill. It was so very heavy when she had filled it with water that she could not lift it to her head even with the help of the little black boy. Three fine looking cavalheiros happened to be passing on horseback. She sent the little black boy to ask them if they would help her. They said they couldn’t possibly stop. The little old woman was very angry. She did not know that they were on their way to the magic castle and couldn’t stop. The same wicked fairy who had shut the little old woman’s beautiful daughters up in the sacks, was leading them on.

If the little old woman had known all about the three cavalheiros she would not have been angry. She would have wanted to help them instead. The three cavalheiros were very good and very wise, so they managed to get along very well. As soon as they reached the enchanted castle the fairy showed them to their beds. She had marked each bed with a candle. No one before had ever been wise enough to blow out these candles. These cavalheiros blew out the candles and that took away the fairy’s power over them. They were able to escape from the palace. When the wicked fairy came to put them in her magic sacks she found the beds empty.

After a while the three cavalheiros approached the house of the little old woman and the little black boy. The little old woman was still angry because they had refused to stop and help her lift her water jar to her head. When she saw them coming she threw stones at them. Of course that was a very stupid thing to do.

When the three cavalheiros saw what was happening they were greatly surprised. They had forgotten all about the little black boy and the little old woman whom he had asked them to help. When they saw her coming with the stones they thought that she must be a wicked fairy in the form of a little old woman.

The cavalheiro who had one vintem’s worth of ashes in his pocket threw the ashes at her. It became night. The little old woman came on with her stones just the same.

The cavalheiro who had one vintem’s worth of pins in his pocket threw the pins at her. Immediately a high, thorny hedge sprang out of the ground between the little old woman and the three cavalheiros.

The little old woman was too angry to think clearly. If she had not been so angry she would have known at once that this must be magic wood. The little black boy, however, had his wits about him. He hastened to gather the branches even though the thorns tore his hands. Soon he had brought together a great pile of wood like the piles which they make in the streets to burn on a festa night.

The little old woman saw what he was doing and ran to get the magic sacks in which her daughters were imprisoned. They laid the sacks on top of the pile of magic wood and lighted the fire. There was a great noise like thunder. Out of the three magic sacks there sprang three beautiful maidens who had been preserved alive in the sacks by a miracle of Nossa Senhora.

The three cavalheiros married the three beautiful maidens and the little boy who was now white, grew up to be the greatest cavalheiro of them all. 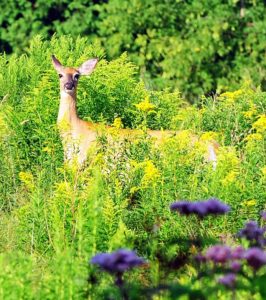 The Fawn and His Mother (Aesop’s fables) by Aesop
A YOUNG FAWN once said to his Mother, “You are…
Cresta Posts Box by CP