The Ghost-Brahman (Folk-Tales of Bengal, 1912) by Rev. Lal Behari Day 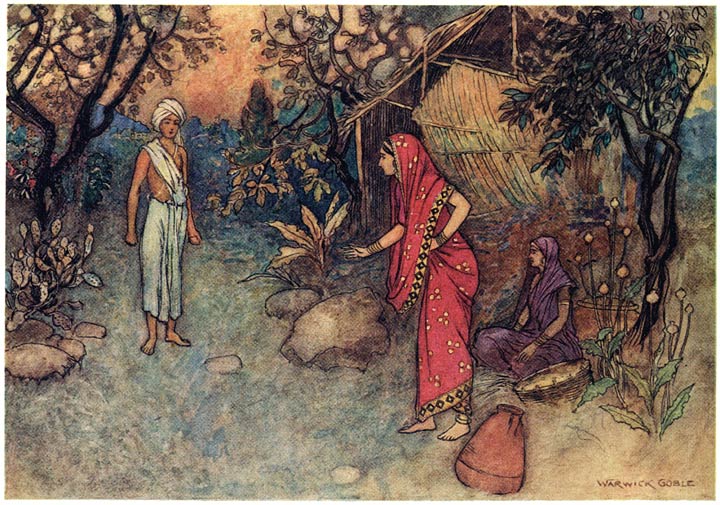 Once on a time there lived a poor Brahman, who not being a Kulin, found it the hardest thing in the world to get married. He went to rich people and begged of them to give him money that he might marry a wife. And a large sum of money was needed, not so much for the expenses of the wedding, as for giving to the parents of the bride. He begged from door to door, flattered many rich folk, and at last succeeded in scraping together the sum needed. The wedding took place in due time; and he brought home his wife to his mother. After a short time he said to his mother—“Mother, I have no means to support you and my wife; I must therefore go to distant countries to get money somehow or other. I may be away for years, for I won’t return till I get a good sum. In the meantime I’ll give you what I have; you make the best of it, and take care of my wife.” The Brahman receiving his mother’s blessing set out on his travels. In the evening of that very day, a ghost assuming the exact appearance of the Brahman came into the house. The newly married woman, thinking it was her husband, said to him—“How is it that you have returned so soon? You said you might be away for years; why have you changed your mind?” The ghost said—“To-day is not a lucky day, I have therefore returned home; besides, I have already got some money.” The mother did not doubt but that it was her son. So the ghost lived in the house as if he was its owner, and as if he was the son of the old woman and the husband of the young woman. As the ghost and the Brahman were exactly like each other in everything, like two peas, the people in the neighbourhood all thought that the ghost was the real Brahman. After some years the Brahman returned from his travels; and what was his surprise when he found another like him in the house. The ghost said to the Brahman—“Who are you? what business have you to come to my house?” “Who am I?” replied the Brahman, “let me ask who you are. This is my house; that is my mother, and this is my wife.” The ghost said—“Why herein is a strange thing. Every one knows that this is my house, that is my wife, and yonder is my mother; and I have lived here for years. And you pretend this is your house, and that woman is your wife. Your head must have got turned, Brahman.” So saying the ghost drove away the Brahman from his house. The Brahman became mute with wonder. He did not know what to do. At last he bethought himself of going to the king and of laying his case before him. The king saw the ghost-Brahman as well as the Brahman, and the one was the picture of the other; so he was in a fix, and did not know how to decide the quarrel. Day after day the Brahman went to the king and besought him to give him back his house, his wife, and his mother; and the king, not knowing what to say every time, put him off to the following day. Every day the king tells him to—“Come to-morrow”; and every day the Brahman goes away from the palace weeping and striking his forehead with the palm of his hand, and saying—“What a wicked world this is! I am driven from my own house, and another fellow has taken possession of my house and of my wife! And what a king this is! He does not do justice.” “‘How is it that you have returned so soon?’”

Now, it came to pass that as the Brahman went away every day from the court outside the town, he passed a spot at which a great many cowboys used to play. They let the cows graze on the meadow, while they themselves met together under a large tree to play. And they played at royalty. One cowboy was elected king; another, prime minister or vizier; another, kotwal, or prefect of the police; and others, constables. Every day for several days together they saw the Brahman passing by weeping. One day the cowboy king asked his vizier whether he knew why the Brahman wept every day. On the vizier not being able to answer the question, the cowboy king ordered one of his constables to bring the Brahman to him. One of them went and said to the Brahman—“The king requires your immediate attendance.” The Brahman replied—“What for? I have just come from the king, and he put me off till to-morrow. Why does he want me again?” “It is our king that wants you—our neat-herd king,” rejoined the constable. “Who is neat-herd king?” asked the Brahman. “Come and see,” was the reply. The neat-herd king then asked the Brahman why he every day went away weeping. The Brahman then told him his sad story. The neat-herd king, after hearing the whole, said, “I understand your case; I will give you again all your rights. Only go to the king and ask his permission for me to decide your case.” The Brahman went back to the king of the country, and begged his Majesty to send his case to the neat-herd king, who had offered to decide it. The king, whom the case had greatly puzzled, granted the permission sought. The following morning was fixed for the trial. The neat-herd king, who saw through the whole, brought with him next day a phial with a narrow neck. The Brahman and the ghost-Brahman both appeared at the bar. After a great deal of examination of witnesses and of speech-making, the neat-herd king said—“Well, I have heard enough. I’ll decide the case at once. Here is this phial. Whichever of you will enter into it shall be declared by the court to be the rightful owner of the house the title of which is in dispute. Now, let me see, which of you will enter.” The Brahman said—“You are a neat-herd, and your intellect is that of a neat-herd. What man can enter into such a small phial?” “If you cannot enter,” said the neat-herd king, “then you are not the rightful owner. What do you say, sir, to this?” turning to the ghost-Brahman and addressing him. “If you can enter into the phial, then the house and the wife and the mother become yours.” “Of course I will enter,” said the ghost. And true to his word, to the wonder of all, he made himself into a small creature like an insect, and entered into the phial. The neat-herd king forthwith corked up the phial, and the ghost could not get out. Then, addressing the Brahman, the neat-herd king said, “Throw this phial into the bottom of the sea, and take possession of your house, wife, and mother.” The Brahman did so, and lived happily for many years and begat sons and daughters. 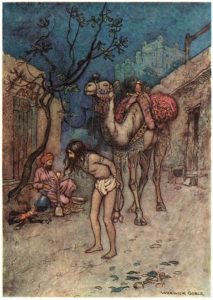 The Adventures of Two Thieves and of their Sons (Folk-Tales of Bengal, 1912) by Rev. Lal Behari Day
Part I Once on a time there lived two thieves…
Cresta Posts Box by CP