There was once an old woman who was a terrible witch, and she had a daughter and a granddaughter. The time came for the old crone to die, so she summoned her daughter and gave her these instructions:

“Mind, daughter! when I’m dead, don’t you wash my body with lukewarm water; but fill a cauldron, make it boil its very hottest, and then with that boiling water regularly scald me all over.”

After saying this, the witch lay ill two or three days, and then died. The daughter ran round to all her neighbors, begging them to come and help her to wash the old woman, and meantime the little granddaughter was left all alone in the cottage. And this is what she saw there. All of a sudden there crept out from beneath the stove two demons—a big one and a tiny one—and they ran up to the dead witch. The old demon seized her by the feet, and tore away at her so that he stripped off all her skin at one pull. Then he said to the little demon:

“Take the flesh for yourself, and lug it under the stove.”

So the little demon flung his arms round the carcase, and dragged it under the stove. Nothing was left of the old woman but her skin. Into it the old demon inserted himself, and then he lay down just where the witch had been lying.

Presently the daughter came back, bringing a dozen other women with her, and they all set to work laying out the corpse.

“Mammy,” says the child, “they’ve pulled granny’s skin off while you were away.”

“What do you mean by telling such lies?”

“It’s quite true, Mammy! There was ever such a blackie came from under the stove, and he pulled the skin off, and got into it himself.”

“Hold your tongue, naughty child! you’re talking nonsense!” cried the old crone’s daughter; then she fetched a big cauldron, filled it with cold water, put it on the stove, and heated it till it boiled furiously. Then the women lifted up the old crone, laid her in a trough, took hold of the cauldron, and poured the whole of the boiling water over her at once. The demon couldn’t stand it. He leaped out of the trough, dashed through the doorway, and disappeared, skin and all. The women stared:

“What marvel is this?” they cried. “Here was the dead woman, and now she isn’t here. There’s nobody left to lay out or to bury. The demons have carried her off before our very eyes!” 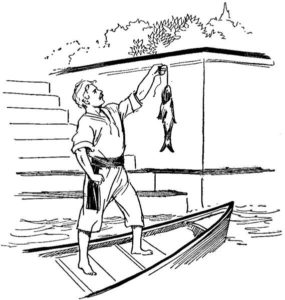 The King and the Fisherman (A Book of Persian Fairy Tales, 1906) By Henry Altemus
THE countries washed by the great rivers Tigris and Euphrates…
Cresta Posts Box by CP