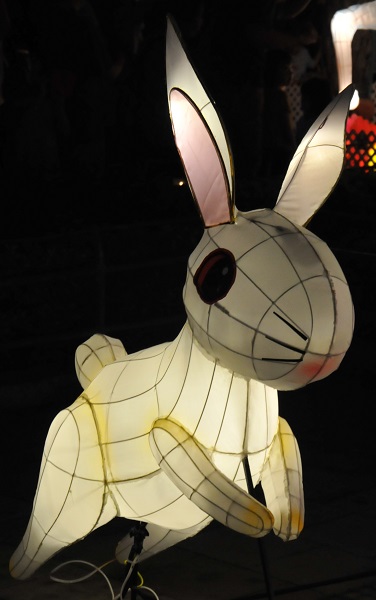 In folk and fairy tales around the world the hare is portrayed as a cunning and clever character. He often turns the tables on stronger animals and predators due to his wits and – last but not least – swiftness.

Held on the fourth Saturday or Sunday each September is the “National Rabbit Day”. It centers on the welfare of our long-eared friends and should serve us as a reminder of their animal rights.

What better day to enjoy a few stories about rabbits. Therefore, without further ado, here are my favorite stories about “The hare”:

The White Hare and the Crocodiles

The White Hare and the Crocodiles is a folk tale from old Japan. Other than in most other stories the hare is unlucky with his deceit. While he first successfully deceives the crocodiles, his schadenfreude and arrogance leads to his capture. He then encounters a fairy and this acquaintance changes his life.

How the Hare deceived the Tiger

This is a story of Shan folk lore. The Shan people live in the area of modern day Myanmar as well as Thailand or Laos.

In the “How the Hare deceived the tiger”, the hare proves that though small she (yes – the hare is translated as a woman here) was full of wisdom, and although the tiger was bigger, stronger, and fiercer than she, yet she, through her wisdom, was able to deceive him and lure him into a trap.

The Adventures of Kintaro, the Golden Boy

In this beautiful story our friend Long-ears is not the main character, but only a retainer of Kintaro, the Golden Boy. If you ever wondered how a wrestling match between a hare and a monkey would look like, it’s best to read “The Adventures of Kintaro”.

The Hare and the Tortoise

An all time classic by the famous Aesop. If you want to learn more about the “The Life of Aesop” check out what George Fyler Townsend wrote about him.

In this story the Hare, for a change, doesn’t get his way, but is too overconfident.

The Story of Hare

The “Story of Hare” is a crazy African story with quite some unnecessary bloodshed featuring an “Inkalimeva”, a type of fabulous animal.

The Origin of Death

Here is yet aAnother African tale.

Do you know why we have to die? No? Do you at least know why the hare’s nose is slit? Also no?

Read “The Origin of Death” and find out!

Initially I posted a Top 5 List of “Stories about the Hare” that has now turned in an ever increasing collection of stories about the hare. Back then I was inspired by my friend Dyna and her translations of authentic African folk stories on malamusi.com. Therefore I also want to share a few bonus tales or memorable mentions that you can read on her website with you. I happy to share with you:

As far as I know, especially in African stories, the hare’s wittiness is mixed with a vicious deceitfulness often leading to the death or misery of his victims. Therefore I especially want to suggest that you read The greedy Hare. You might discover your compassion for the hare. If not, at least for once he got what he desserved.