THE PARSON (REYNARD THE FOX, 1920) by JOHN MASEFIELD

And with him came the stock which grew him—
The parson and his sporting wife,
She was a stout one, full of life
With red, quick, kindly, manly face.
She held the knave, queen, king, and ace
In every hand she played with men.
She was no sister to the hen,
But fierce and minded to be queen.
She wore a coat and skirt of green,
Her waistcoat cut of bunting red,
Her tie pin was a fox’s head.
The parson was a manly one,
His jolly eyes were bright with fun.
His jolly mouth was well inclined
To cry aloud his jolly mind
To everyone, in jolly terms.
He did not talk of churchyard worms,
But of our privilege as dust
To box a lively bout with lust
Ere going to Heaven to rejoice.
He loved the sound of his own voice.
His talk was like a charge of horse;
His build was all compact, for force,
Well-knit, well-made, well-coloured, eager,
He kept no Lent to make him meagre.
He loved his God, himself and man.
He never said “Life’s wretched span;
This wicked world,” in any sermon.
This body, that we feed the worm on,
To him, was jovial stuff that thrilled.
He liked to see the foxes killed;
But most he felt himself in clover
To hear “Hen left, hare right, cock over,”
At woodside, when the leaves are brown.
Some grey cathedral in a town
Where drowsy bells toll out the time
To shaven closes sweet with lime,
And wall-flower roots drive out of the mortar
All summer on the Norman Dortar,
Was certain some day to be his.
Nor would a mitre go amiss
To him, because he governed well.
His voice was like the tenor bell
When services were said and sung.
And he had read in many a tongue,
Arabic, Hebrew, Spanish, Greek. 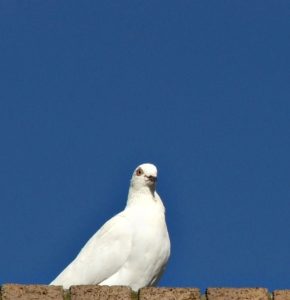 The Thirsty Pigeon (Aesop’s fables) by Aesop
A PIGEON, oppressed by excessive thirst, saw a goblet of…
Cresta Posts Box by CP