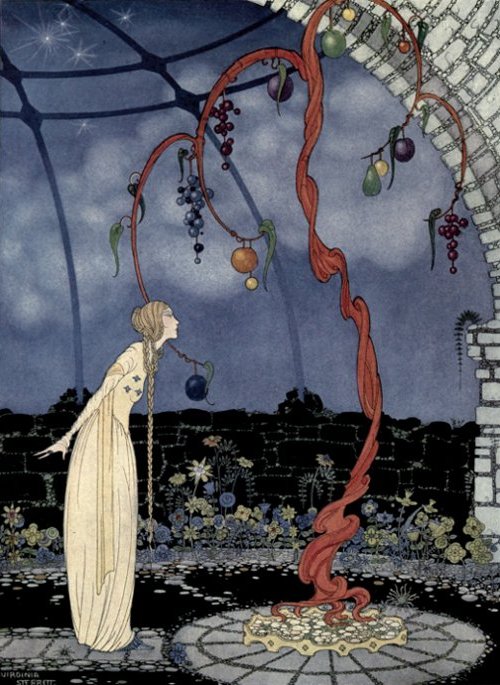 BLONDINE grew to be seven years old and Brunette three.

The king had given Blondine a charming little carriage drawn by ostriches, and a little coachman ten years of age, who was the nephew of her nurse.

The little page, who was called Gourmandinet, loved Blondine tenderly. He had been her playmate from her birth and she had shown him a thousand acts of kindness.

But Gourmandinet had one terrible fault; he was a gourmand—was so fond of dainties and sweet things, that for a paper of bonbons he would commit almost any wicked action. Blondine often said to him:

“I love you dearly, Gourmandinet, but I do not love to see you so greedy. I entreat you to correct this villainous fault which will make you despised by all the world.”

Gourmandinet kissed her hand and promised to reform. But, alas! he continued to steal cakes from the kitchen and bonbons from the store-room. Often, indeed, he was whipped for his disobedience and gluttony.

The queen Fourbette heard on every hand the reproaches lavished upon the page and she was cunning enough to think that she might make use of this weakness of Gourmandinet and thus get rid of poor Blondine.

The garden in which Blondine drove in her little carriage, drawn by ostriches and guided by her little coachman, Gourmandinet, was separated by a grating from an immense and magnificent forest, called the Forest of Lilacs because during the whole year these lilacs were always covered with superb flowers.

No one, however, entered these woods. It was well known that it was enchanted ground and that if you once entered there you could never hope to escape.

Gourmandinet knew the terrible secret of this forest. He had been severely forbidden ever to drive the carriage of Blondine in that direction lest by some chance Blondine might pass the grating and place her little feet on the enchanted ground.

Many times the king Benin had sought to build a wall the entire length of the grating or to secure it in some way so as to make an entrance there impossible. But the workmen had no sooner laid the foundation than some unknown and invisible power raised the stones and they disappeared from sight.

The queen Fourbette now sought diligently to gain the friendship of Gourmandinet by giving him every day some delicious dainties. In this way she made him so complete a slave to his appetite that he could not live without the jellies, bonbons and cakes which she gave him in such profusion. At last she sent for him to come to her, and said:—

“Gourmandinet, it depends entirely upon yourself whether you shall have a large trunk full of bonbons and delicious dainties or never again eat one during your life.”

“Never again eat one! Oh! madam, I should die of such punishment. Speak, madam, what must I do to escape this terrible fate?”

“It is necessary,” said the queen, looking at him fixedly, “that you should drive the princess Blondine near to the Forest of Lilacs.”

“I cannot do it, madam; the king has forbidden it.”

“Ah! you cannot do it; well, then, adieu. No more dainties for you. I shall command every one in the house to give you nothing.”

“Oh! madam,” said Gourmandinet, weeping bitterly, “do not be so cruel. Give me some order which it is in my power to execute.”

“I can only repeat that I command you to lead the princess Blondine near to the Forest of Lilacs; that you encourage her to descend from the carriage, to cross the grating and enter the enchanted ground.”

“But, madam,” replied Gourmandinet, turning very pale, “if the princess enters this forest she can never escape from it. You know the penalty of entering upon enchanted ground. To send my dear princess there is to give her up to certain death.”

“For the third and last time,” said the queen, frowning fearfully, “I ask if you will take the princess to the forest? Choose! either an immense box of bonbons which I will renew every month or never again to taste the delicacies which you love.”

“But how shall I escape from the dreadful punishment which his majesty will inflict upon me?”

“Do not be disquieted on that account. As soon as you have induced Blondine to enter the Forest of Lilacs, return to me. I will send you off out of danger with your bonbons, and I charge myself with your future fortune.”

“Oh! madam, have pity upon me. Do not compel me to lead my dear princess to destruction. She who has always been so good to me!”

“You still hesitate, miserable coward! Of what importance is the fate of Blondine to you? When you have obeyed my commands I will see that you enter the service of Brunette and I declare to you solemnly that the bonbons shall never fail.”

Gourmandinet hesitated and reflected a few moments longer and, alas! at last resolved to sacrifice his good little mistress to his gluttony.

The remainder of that day he still hesitated and he lay awake all night weeping bitter tears as he endeavored to discover some way to escape from the power of the wicked queen; but the certainty of the queen’s bitter revenge if he refused to execute her cruel orders, and the hope of rescuing Blondine at some future day by seeking the aid of some powerful fairy, conquered his irresolution and decided him to obey the queen.

In the morning at ten o’clock Blondine ordered her little carriage and entered it for a drive, after having embraced the king her father and promised him to return in two hours.

The garden was immense. Gourmandinet, on starting, turned the ostriches away from the Forest of Lilacs. When, however, they were entirely out of sight of the palace, he changed his course and turned towards the grating which separated them from the enchanted ground. He was sad and silent. His crime weighed upon his heart and conscience.

“What is the matter?” said Blondine, kindly. “You say nothing Are you ill, Gourmandinet?”

“But how pale you are! Tell me what distresses you, poor boy, and I promise to do all in my power to make you happy.”

Blondine’s kind inquiries and attentions almost softened the hard heart of Gourmandinet, but the remembrance of the bonbons promised by the wicked queen, Fourbette, soon chased away his good resolutions. Before he had time to reply, the ostriches reached the grating of the Forest of Lilacs.

“Oh! the beautiful lilacs!” exclaimed Blondine; “how fragrant—how delicious! I must have a bouquet of those beautiful flowers for my good papa. Get down, Gourmandinet and bring me some of those superb branches.”

“I cannot leave my seat, princess, the ostriches might run away with you during my absence.”

“Do not fear,” replied Blondine; “I could guide them myself to the palace.”

“But the king would give me a terrible scolding for having abandoned you, princess. It is best that you go yourself and gather your flowers.”

“That is true. I should be very sorry to get you a scolding, my poor Gourmandinet.”

While saying these words she sprang lightly from the carriage, crossed the bars of the grating and commenced to gather the flowers.

At this moment Gourmandinet shuddered and was overwhelmed with remorse. He wished to repair his fault by calling Blondine but although she was only ten steps from him,—although he saw her perfectly—she could not hear his voice, and in a short time she was lost to view in the enchanted forest.

For a long time Gourmandinet wept over his crime, cursed his gluttony and despised the wicked queen Fourbette.

At last he recalled to himself that the hour approached at which Blondine would be expected at the palace. He returned to the stables through the back entrance and ran at once to the queen, who was anxiously expecting him.

On seeing him so deadly pale and his eyes inflamed from the tears of awful remorse, she knew that Blondine had perished.

Gourmandinet bowed his head. He had not the strength to speak.

She pointed to a large box full of delicious bonbons of every variety. She commanded a valet to raise the box and place it upon one of the mules which had brought her jewelry.

“I confide this box to Gourmandinet, in order that he may take it to my father,” she said. “Go, boy, and return in a month for another.” She placed in his hand at the same time a purse full of gold.

Gourmandinet mounted the mule in perfect silence and set off in full gallop. The mule was obstinate and wilful and soon grew restive under the weight of the box and began to prance and kick. He did this so effectually that he threw Gourmandinet and his precious box of bonbons upon the ground.

Gourmandinet, who had never ridden upon a horse or mule, fell heavily with his head upon the stones and died instantly.

Thus he did not receive from his crime the profit which he had hoped, for he had not even tasted of the bonbons which the queen had given him.

No one regretted him. No one but the poor Blondine had ever loved him. 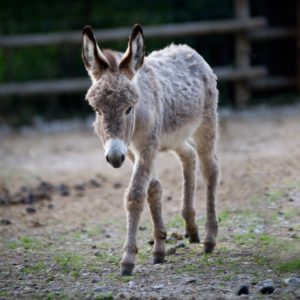 The Ass and the Lapdog (Aesop’s fables) by Aesop
A MAN had an Ass, and a Maltese Lapdog, a…
Cresta Posts Box by CP