THE EIGHT IMMORTALS (I) – (The Chinese Fairy Book, 1921) by Richard Wilhelm

THERE is a legend which declares that Eight Immortals dwell in the heavens. The first is named Dschung Li Kuan. He lived in the time of the Han dynasty, and discovered the wonderful magic of golden cinnabar, the philosopher’s stone. He could melt quicksilver and burn lead and turn them into yellow gold and white silver. And he could fly through the air in his human form. He is the chief of the Eight Immortals.

The second is named Dschang Go. In primal times he gained hidden knowledge. It is said that he was really a white bat, who turned into a man. In the first days of the Tang dynasty an ancient with a white beard and a bamboo drum on his back, was seen riding backward on a black ass in the town of Tschang An. He beat the drum and sang, and called himself old Dschang Go. Another legend says that he always had a white mule with him which could cover a thousand miles in a single day. When he had reached his destination he would fold up the animal and put it in his trunk. When he needed it again, he would sprinkle water on it with his mouth, and the beast would regain its first shape.

The third is named Lu Yuan or Lu Dung Bin (The Mountain Guest). His real name was Li, and he belonged to the ruling Tang dynasty. But when the Empress Wu seized the throne and destroyed the Li family to almost the last man, he fled with his wife into the heart of the mountains. They changed their names to Lu, and, since they lived in hiding in the caverns in the rocks, he called himself the Mountain Guest or the Guest of the Rocks. He lived on air and ate no bread. Yet he was fond of flowers. And in the course of time he acquired the hidden wisdom.

In Lo Yang, the capital city, the peonies bloomed with special luxuriance. And there dwelt a flower fairy, who changed herself into a lovely maiden with whom Guest of the Rocks, when he came to Lo Yang, was wont to converse. Suddenly along came the Yellow Dragon, who had taken the form of a handsome youth. He mocked the flower fairy. Guest of the Rocks grew furious and cast his flying sword at him, cutting off his head. From that time onward he fell back again into the world of mundane pleasure and death. He sank down into the dust of the diurnal, and was no longer able to wing his way to the upper regions. Later he met Dschung Li Kuan, who delivered him, and then he was taken up in the ranks of the Immortals.

Willowelf was his disciple. This was an old willow-tree which had drawn into itself the most ethereal powers of the sunrays and the moonbeams, and had thus been able to assume the shape of a human being. His face is blue and he has red hair. Guest of the Rocks received him as a disciple. Emperors and kings of future times honor Guest of the Rocks as the ancestor and master of the pure sun. The people call him Grandfather Lu. He is very wise and powerful. And therefore the people still stream into Grandfather Lu’s temples to obtain oracles and pray for good luck. If you want to know whether you will be successful or not in an undertaking, go to the temple, light incense and bow your head to earth. On the altar is a bamboo goblet, in which are some dozens of little lottery sticks. You must shake them while kneeling, until one of the sticks flies out. On the lottery-stick is inscribed a number. This number must then be looked up in the Book of Oracles, where it is accompanied by a four-line stanza. It is said that fortune and misfortune, strange to think, occur to one just as foretold by the oracle.

The fourth Immortal is Tsau Guo Gui (Tsau the Uncle of the State). He was the younger brother of the Empress Tsau, who for a time ruled the land. For this reason he was called the Uncle of the State. From his earliest youth he had been a lover of the hidden wisdom. Riches and honors were no more to him than dust. It was Dschung Li Kuan who aided him to become immortal.

The fifth is called Lan Tsai Ho. Nothing is known of his true name, his time nor his family. He was often seen in the market-place, clad in a torn blue robe and wearing only a single shoe, beating a block of wood and singing the nothingness of life.

The sixth Immortal is known as Li Tia Guai (Li with the iron crutch). He lost his parents in early youth and was brought up in his older brother’s home. His sister-in-law treated him badly and never gave him enough to eat. Because of this he fled into the hills, and there learned the hidden wisdom.

Once he returned in order to see his brother, and said to his sister-in-law: “Give me something to eat!” She answered: “There is no kindling wood on hand!” He replied: “You need only to prepare the rice. I can use my leg for kindling wood, only you must not say that the fire might injure me, and if you do not no harm will be done.”

His sister-in-law wished to see his art, so she poured the rice into the pot. Li stretched one of his legs out under it and lit it. The flames leaped high and the leg burned like coal.

When the rice was nearly boiled his sister-in-law said: “Won’t your leg be injured?”

And Li replied angrily: “Did I not warn you not to say anything! Then no harm would have been done. Now one of my legs is lamed.” With these words he took an iron poker and fashioned it into a crutch for himself. Then he hung a bottle-gourd on his back, and went into the hills to gather medicinal herbs. And that is why he is known as Li with the Iron Crutch.

It is also told of him that he often was in the habit of ascending into the heavens in the spirit to visit his master Laotsze. Before he left he would order a disciple to watch his body and soul within it, so that the latter did not escape. Should seven days have gone by without his spirit returning, then he would allow his soul to leave the empty tenement. Unfortunately, after six days had passed, the disciple was called to the death-bed of his mother, and when the master’s spirit returned on the evening of the seventh day, the life had gone out of its body. Since there was no place for his spirit in his own body, in his despair he seized upon the first handy body from which the vital essence had not yet dispersed. It was the body of a neighbor, a lame cripple, who had just died, so that from that time on the master appeared in his form.

The seventh Immortal is called Hang Siang Dsi. He was the nephew of the famous Confucian scholar Han Yu, of the Tang dynasty. From his earliest youth he cultivated the arts of the deathless gods, left his home and became a Taoist. Grandfather Lu awakened him and raised him to the heavenly world. Once he saved his uncle’s life. The latter had been driven from court, because he had objected when the emperor sent for a bone of Buddha with great pomp. When he reached the Blue Pass in his flight, a deep snowfall had made the road impassable. His horse had floundered in a snow-drift, and he himself was well-nigh frozen. Then Hang Siang Dsi suddenly appeared, helped him and his horse out of the drift, and brought them safely to the nearest inn along the Blue Pass. Han Yu sang a verse, in which the lines occurred:Tsin Ling Hill ’mid clouds doth lie,And home is far, beyond my sight!Round the Blue Pass snow towers high,And who will lead the horse aright?

Suddenly it occurred to him that several years before, Hang Siang Dsi had come to his house to congratulate him on his birthday. Before he had left, he had written these words on a slip of paper, and his uncle had read them, without grasping their meaning. And now he was unconsciously singing the very lines of that song that his nephew had written. So he said to Hang Siang Dsi, with a sigh: “You must be one of the Immortals, since you were able thus to foretell the future!”

And thrice Hang Siang Dsi sought to deliver his wife from the bonds of earth. For when he left his home to seek the hidden wisdom, she sat all day long yearning for his presence. Hang Siang Dsi wished to release her into immortality, but he feared she was not capable of translation. So he appeared to her in various forms, in order to try her, once as a beggar, another time as a wandering monk. But his wife did not grasp her opportunities. At last he took the shape of a lame Taoist, who sat on a mat, beat a block of wood and read sutras before the house.

His wife said: “My husband is not at home. I can give you nothing.”

The Taoist answered: “I do not want your gold and silver, I want you. Sit down beside me on the mat, and we will fly up into the air and you shall find your husband again!”

Hereupon the woman grew angry and struck at him with a cudgel.

Then Hang Siang Dsi changed himself into his true form, stepped on a shining cloud and was carried aloft. His wife looked after him and wept loudly; but he had disappeared and was not seen again.

The eighth Immortal is a girl and was called Ho Sian Gu. She was a peasant’s daughter, and though her step-mother treated her harshly she remained respectful and industrious. She loved to give alms, though her step-mother tried to prevent her. Yet she was never angry, even when her step-mother beat her. She had sworn not to marry, and at last her step-mother did not know what to do with her. One day, while she was cooking rice, Grandfather Du came and delivered her. She was still holding the rice-spoon in her hand as she ascended into the air. In the heavens she was appointed to sweep up the fallen flowers at the Southern Gate of Heaven.

Note: The legends of the Eight Immortals, regarded as one group, do not go back further than the Manchu dynasty, though individual ones among them were known before. Some of the Immortals, like Han Siang Dsi, are historic personages, others purely mythical. In the present day they play an important part in art and in the art-crafts. Their emblems also occur frequently: Dschung Li Kuan is represented with a fan. Dschang Go has a bamboo drum with two drum-sticks (and his donkey). Lu Dung Bin has a sword and a flower-basket on his back. Tsau Guo Gui has two small boards, (Yin Yang Ban), which he can throw into the air. 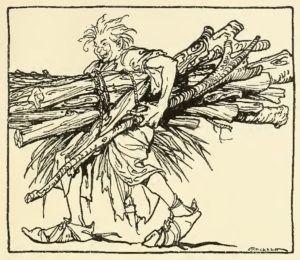