THE shinansha, OR THE SOUTH POINTING CARRIAGE (Tales of Old Japan) by YEI THEODORA OZAKI

The compass, with its needle always pointing to the North, is quite a common thing, and no one thinks that it is remarkable now, though when it was first invented it must have been a wonder.

Now long ago in China, there was a still more wonderful invention called the shinansha. This was a kind of chariot with the figure of a man on it always pointing to the South. No matter how the chariot was placed the figure always wheeled about and pointed to the South.

This curious instrument was invented by Kotei, one of the three Chinese Emperors of the Mythological age. Kotei was the son of the Emperor Yuhi. Before he was born his mother had a vision which foretold that her son would be a great man.

One summer evening she went out to walk in the meadows to seek the cool breezes which blow at the end of the day and to gaze with pleasure at the star-lit heavens above her. As she looked at the North Star, strange to relate, it shot forth vivid flashes of lightning in every direction. Soon after this her son Kotei came into the world.

Kotei in time grew to manhood and succeeded his father the Emperor Yuhi. His early reign was greatly troubled by the rebel Shiyu. This rebel wanted to make himself King, and many were the battles which he fought to this end. Shiyu was a wicked magician, his head was made of iron, and there was no man that could conquer him.

At last Kotei declared war against the rebel and led his army to battle, and the two armies met on a plain called Takuroku. The Emperor boldly attacked the enemy, but the magician brought down a dense fog upon the battlefield, and while the royal army were wandering about in confusion, trying to find their way, Shiyu retreated with his troops, laughing at having fooled the royal army.

No matter however strong and brave the Emperor’s soldiers were, the rebel with his magic could always escape in the end.

Kotei returned to his Palace, and thought and pondered deeply as to how he should conquer the magician, for he was determined not to give up yet. After a long time he invented the shinansha with the figure of a man always pointing South, for there were no compasses in those days. With this instrument to show him the way he need not fear the dense fogs raised up by the magician to confound his men.

Kotei again declared war against Shiyu. He placed the shinansha in front of his army and led the way to the battlefield.

The battle began in earnest. The rebel was being driven backward by the royal troops when he again resorted to magic, and upon his saying some strange words in a loud voice, immediately a dense fog came down upon the battlefield.

But this time no soldier minded the fog, not one was confused. Kotei by pointing to the shinansha could find his way and directed the army without a single mistake. He closely pursued the rebel army and drove them backward till they came to a big river. This river Kotei and his men found was swollen by the floods and impossible to cross.

Shiyu by using his magic art quickly passed over with his army and shut himself up in a fortress on the opposite bank.

When Kotei found his march checked he was wild with disappointment, for he had very nearly overtaken the rebel when the river stopped him.

He could do nothing, for there were no boats in those days, so the Emperor ordered his tent to be pitched in the pleasantest spot that the place afforded.

One day he stepped forth from his tent and after walking about for a short time he came to a pond. Here he sat down on the bank and was lost in thought.

It was autumn. The trees growing along the edge of the water were shedding their leaves, which floated hither and thither on the surface of the pond. By and by, Kotei’s attention was attracted to a spider on the brink of the water. The little insect was trying to get on to one of the floating leaves near by. It did so at last, and was soon floating over the water to the other side of the pond.

This little incident made the clever Emperor think that he might try to make something that could carry himself and his men over the river in the same way that the leaf had carried over the spider. He set to work and persevered till he invented the first boat. When he found that it was a success he set all his men to make more, and in time there were enough boats for the whole army.

Kotei now took his army across the river, and attacked Shiyu’s headquarters. He gained a complete victory, and so put an end to the war which had troubled his country for so long.

This wise and good Emperor did not rest till he had secured peace and prosperity throughout his whole land. He was beloved by his subjects, who now enjoyed their happiness of peace for many long years under him. He spent a great deal of time in making inventions which would benefit his people, and he succeeded in many besides the boat and the South Pointing shinansha.

He had reigned about a hundred years when one day, as Kotei was looking upwards, the sky became suddenly red, and something came glittering like gold towards the earth. As it came nearer Kotei saw that it was a great Dragon. The Dragon approached and bowed down its head before the Emperor. The Empress and the courtiers were so frightened that they ran away screaming.

But the Emperor only smiled and called to them to stop, and said:

“Do not be afraid. This is a messenger from Heaven. My time here is finished!” He then mounted the Dragon, which began to ascend towards the sky.

When the Empress and the courtiers saw this they all cried out together:

“Wait a moment! We wish to come too.” And they all ran and caught hold of the Dragon’s beard and tried to mount him.

But it was impossible for so many people to ride on the Dragon. Several of them hung on to the creature’s beard so that when it tried to mount the hair was pulled out and they fell to the ground.

Meanwhile the Empress and a few of the courtiers were safely seated on the Dragon’s back. The Dragon flew up so high in the heavens that in a short time the inmates of the Palace, who had been left behind disappointed, could see them no more.

After some time a bow and an arrow dropped to the earth in the courtyard of the Palace. They were recognized as having belonged to the Emperor Kotei. The courtiers took them up carefully and preserved them as sacred relics in the Palace. 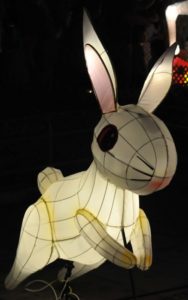 THE FARMER AND THE BADGER (Tales of Old Japan) by YEI THEODORA OZAKI
Long, long ago, there lived an old farmer and his…
Cresta Posts Box by CP