EAU-MINON had entered by a little passage, which seemed made expressly for him and had probably given notice to some one at the castle, as the gate opened without Blondine having called.

She entered the court-yard but saw no one.

The door of the castle opened of itself. Blondine entered the vestibule which was of rare white marble. All the doors of the castle now opened like the first and the princess passed through a suite of beautiful rooms.

At last, in the back part of a charming salon, furnished with blue and gold, she perceived a white hind, lying upon a bed of fine and fragrant grasses. Beau-Minon stood near her. The pretty hind saw Blondine, arose, and approached her.

“You are most welcome, Blondine,” said she. “My son Beau-Minon and I have expected you for a long time.”

At these words, Blondine was much frightened.

“Take courage, princess; you are with friends. I know the king your father and I love him and I love you also.”

“Oh, madam,” said Blondine, “if you know the king my father, I pray you to take me to him. My absence must make him very wretched.”

“My dear Blondine,” said the hind, whose name was Bonne-Biche, sighing, “it is not in my power to conduct you to your father. You are in the hands of the magician of the Forest of Lilacs. I myself am subject to his power which is superior to mine but I can send soft dreams to your father, which will reassure him as to your fate and let him know that you are safe with me.”

“Oh, madam!” said Blondine, in an agony of grief, “shall I never again see my father whom I love so tenderly? My poor father!”

“Dear Blondine, do not distress yourself as to the future. Wisdom and prudence are always recompensed. You will see your father again but not now. In the meantime be good and docile. Beau-Minon and I will do all in our power to make you happy.”

Blondine sighed heavily and shed a few tears. She then reflected that to manifest such grief was a poor recompense for all the goodness of Bonne-Biche. She resolved, therefore, to control herself and to be cheerful.

Bonne-Biche took her to see the apartment they had prepared for her. The bedroom was hung with rose-colored silk embroidered with gold. The furniture was covered with white velvet worked with silks of the most brilliant hues. Every species of animal, bird and butterfly were represented in rare embroidery.

Adjoining Blondine’s chamber was a small study. It was hung with sky-blue damask, embroidered with fine pearls. The furniture was covered with silver moiré, adorned with nails of turquoise. Two magnificent portraits, representing a young and superbly handsome woman and a strikingly attractive young man, hung on the walls. Their costumes indicated that they were of royal race.

“Whose portraits are these, madam?” said Blondine to Bonne-Biche.

“I am forbidden to answer that question, dear Blondine. You will know later;—but this is the hour for dinner. Come, Blondine, I am sure you are hungry.”

Blondine was in fact almost dying of hunger. She followed Bonne-Biche and they entered the dining-room where she saw a table strangely served.

An enormous cushion of black satin was placed on the floor for Bonne-Biche. On the table before her was a vase filled with the choicest herbs, fresh and nutritious and near this vase was a golden bucket, filled with fresh and limpid water.

Opposite Bonne-Biche was a little stool for Beau-Minon while before him was a little porringer in gold, filled with little fried fish and the thighs of snipes. At one side was a bowl of rich crystal full of fresh milk.

Between Beau-Minon and Bonne-Biche a plate was placed for Blondine. Her chair was of carved ivory covered with crimson velvet attached with nails of diamonds. Before her was a gold plate richly chased, filled with delicious soup made of a young pullet and fig-birds, her glass and water-bottle were of carved rock-crystal, a muffin was placed by her side, her fork and spoon were of gold and her napkin was of linen, finer than anything she had ever seen.

The table was served by gazelles who were marvellously adroit. They waited, carved and even divined the wishes of Blondine, Bonne-Biche and Beau-Minon. The dinner was exquisite—the chicken was splendid, the game and fish most delicate, the pastry and bonbons superlative. Blondine was hungry so she ate of all and found all excellent.

After dinner, Bonne-Biche and Beau-Minon conducted the princess into the garden. She found there the most delicious fruits and lovely walks.

After a charming walk, Blondine entered the castle with her new friends, much fatigued. Bonne-Biche proposed that she retire, to which she agreed joyfully.

Blondine entered her chamber and found two gazelles waiting to attend her. They disrobed her with grace and adroitness, placed her in bed and seated themselves by her couch to watch over her.

Blondine was soon peacefully asleep—not, however, without having first thought of her father and wept bitterly over her cruel separation from him. 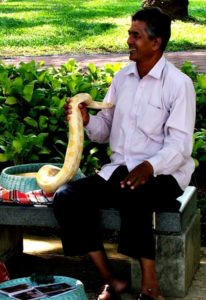 The Laborer and the Snake (Aesop’s fables) by Aesop
A SNAKE, having made his hole close to the porch…
Cresta Posts Box by CP