St. Nicholas – His Legend and His Role in the Christmas Celebration and Other Popular Customs (By George H. McKnight, 1917) – Chapter 11 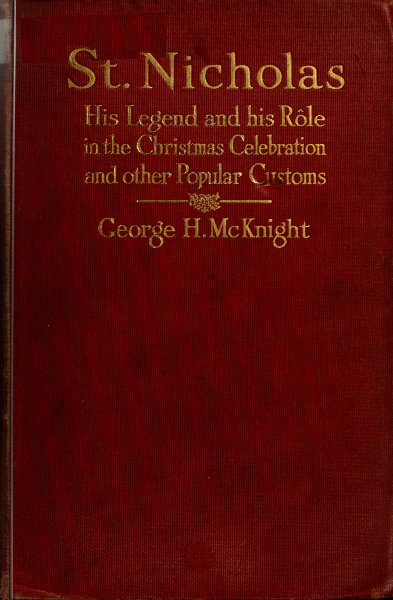 And when it pleased our Lord to have him depart out of this world, he prayed our Lord that he would send him his angels, and inclining his head, he saw the angels come to him, whereby he knew well that he should depart, and began this holy psalm: In te domine speravi, unto in manus tuas, and so saying: “Lord into thine hands I commend my spirit,” he rendered up his soul and died, the year of our Lord three hundred and forty-three, with great melody sung of the celestial company.

This is the Golden Legend account of the end of the earthly life of the kindly bishop-saint. His body was placed in a tomb of marble, and in the year 1087 was discovered by Italian merchants and borne by them to the city of Bari in Italy. There his tomb is a famous center for pilgrimages. On his festival day, many thousands bearing staves bound with olive and pine honor his memory. It is said that when his tomb at Myra was opened, the body was found swimming in oil, and that to this day there continues to issue from his body a holy oil “which is much available to the health and sicknesses of many men.”

St. Nicholas, the guardian of so many things, also keeps guard over his own remains. Wace relates the story of a man carrying off a supposed tooth of the holy saint. In the night St. Nicholas appeared and admonished the thief, and in the morning the tooth was gone.

St. Nicholas was mortal. But his deeds are immortal. His beneficent acts have flowered in legendary story and have found fruition in universal popular customs animated by the same spirit of kindness that pervaded the whole life of the saint. Probably the life history of no other person, save that of the Founder of Christianity himself, has been so intimately woven about human custom and human life as that of St. Nicholas. In certain parts of Siberia he is worshiped as a god. Even in our own country, although we are supposed to have outgrown idolatry, representations of Santa Claus about Christmas time, in shop windows and on street corners, are objects of worship little short of idolatry. To Santa Claus also at Christmas time are addressed the most sincere, even if not the most unselfish, supplications.

We may well conclude our present consideration of St. Nicholas and his works with an invocation to him, using the words composed by the recluse Godric, back in the twelfth century, which form one of the very earliest of English lyrics: 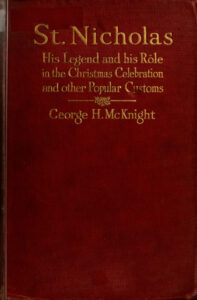 St. Nicholas – His Legend and His Role in the Christmas Celebration and Other Popular Customs (By George H. McKnight, 1917) – Chapter 10
CHAPTER X ST. NICHOLAS, DEFENDER OF THE FAITH Throughout the…
Cresta Posts Box by CP