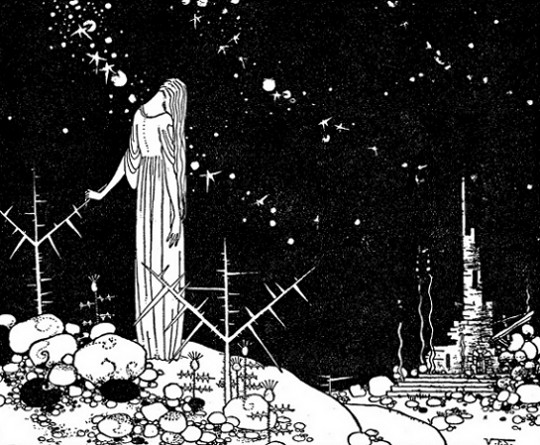 BLONDINE was stupefied! Her conduct now appeared to her in all its horror. She had shown a monstrous ingratitude towards the friends who had been so tenderly devoted to her—who had dedicated seven years to the care of her education. Would these kind friends ever receive her, ever pardon her? What would be her fate, if they should close their doors against her? And then, what did those awful words of the wicked Parrot signify: “You have caused the destruction of your friends”? Blondine sees the castle of Bonne-Biche and Beau-Minon

Horror seized upon her, when in place of the superb building she saw only an appalling ruin—in place of the magnificent trees and rare flowers which surrounded it, only briers and thorns, nettles and thistles, could be seen. Terrified and most desolate, she tried to force her way in the midst of the ruins, to seek some knowledge of her kind friends. A large Toad issued from a pile of stones, advanced before her, and said:—

“What are you seeking? Have you not occasioned the death of your friends by the basest ingratitude? Begone! do not insult their memory by your unwelcome presence!”

“Alas! alas!” cried Blondine, “my poor friends, Bonne-Biche and Beau-Minon, why can I not atone by my death for the sufferings I have caused them?” And she fell, sobbing piteously, upon the stones and nettles; her grief and her repentance were so excessive that she did not feel their sharp points in her tender flesh. She wept profusely a long time. At last she arose and looked about her, hoping to find some shelter where she might take refuge. Ruin only stared her in the face!

“Well,” said she, “let the wild beasts tear me to pieces, let me die of hunger and thirst, if I can expiate my sins here upon the tomb of Bonne-Biche and Beau-Minon!”

As she uttered these words, she heard a soft voice saying: “True repentance can atone for the worst of crimes.”

She raised her head and saw only an immense black Crow flying above her.

“Alas! alas!” said Blondine, “my repentance however true, however bitter it may be, can never give me back the lives of my dear Bonne-Biche and Beau-Minon!”

“Courage, courage, Blondine! redeem your fault by your repentance and do not allow yourself to be utterly cast down by grief.”

The poor princess arose and left the scene of desolation. She followed a little path, where the large trees seemed to have rooted out the brambles and the earth was covered with moss. She was utterly exhausted with grief and fatigue and fell at the foot of a large tree, sobbing piteously.

She saw near her only a Frog, which was looking at her compassionately.

“Oh, Frog!” said the princess, “you seem to pity my anguish! What will become of me now that I am alone and desolate in the world?”

“Courage and hope!” was the reply.

Blondine sighed deeply and looked around, hoping to discover some herb or fruit to appease her hunger and thirst. She saw nothing and her tears flowed freely. The sound of bells now somewhat dissipated her despairing thoughts. She saw a beautiful cow approaching her, gently and slowly. On arriving near her, the cow paused, bowed down, and showed her a silver porringer attached to her neck by a chain of beaten gold.

Blondine was very grateful for this unexpected succor. She detached the porringer, milked the cow and drank the sweet milk with delight. The pretty, gentle cow signed to her to replace the porringer. Blondine obeyed, kissed her on the neck and said, sadly:—

“Thanks, Blanchette, it is without doubt to my poor friends that I owe this sweet charity. Perhaps in another and better world they can see the repentance of their poor Blondine and wish to assist her in her frightful position.”

“A true repentance will obtain pardon for all faults,” said a kind voice.

“Ah!” exclaimed Blondine, “years of sorrow and weeping for my crimes would not suffice! I can never pardon myself!”

In the mean time, night approached. Notwithstanding her anguish and repentance, Blondine began to reflect upon some means of securing herself from the ferocious wild beasts, whose terrible roars she already believed she heard in the distance. She saw some steps before her a kind of hut, formed by several trees growing near together and interlacing their branches. Bowing her head, she entered, and found that by carefully connecting some branches she could form a pretty and secure retreat. She employed the remainder of the day in arranging this little room and gathered a quantity of moss, with which she made herself a bed and pillow. She concealed the entrance to this little retreat by some broken branches and leaves and went to rest, utterly worn out with regret and fatigue.

When Blondine awoke it was broad daylight. At first she could scarcely collect her thoughts and understand her position but the sad realities of her lot were soon apparent to her and she commenced weeping as before.

Blondine was hungry, and she could not imagine how she was to secure food but soon she heard again the sound of the cow-bells. In a few moments, Blanchette stood near her. Blondine again loosened the porringer, drew the milk and drank till her hunger was appeased, then replaced the porringer and kissed Blanchette, hoping to see her again during the day. Every day—in the morning, at midday and in the evening—Blanchette came to offer Blondine her frugal repast.

Blondine passed the time in tears for her poor friends, and bitter self-reproach for her crimes.

“By my unpardonable disobedience,” she said to herself, “I have caused the most terrible misfortunes, which it is not in my power to repair. I have not only lost my good and true friends but I am deprived of the only means of finding my father, my poor father, who perhaps still expects his Blondine, his most unhappy Blondine, condemned to live and die alone in this frightful forest where her evil genius reigns supreme.”

Blondine sought to amuse and employ herself in every possible way. Her little home was neatly arranged, and fresh moss and leaves composed her simple couch. She had tied some branches together and formed a seat and she made herself some needles and pins of the thorns and twisted some thread from the hemp which grew near her little hut, and with these implements she had mended the rents in her shoes.

In this simple way Blondine lived for six months; her grief was always the same and it is just to say that it was not her sad and solitary life which made her unhappy but sincere regret for her fault. She would willingly have consented to pass her life in the forest if she could thus have brought to life Bonne-Biche and Beau-Minon. 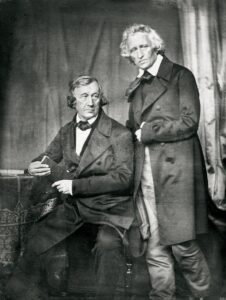 FREDERICK AND CATHERINE (Grimm’s Kinder und Hausmärchen) by The Brothers Grimm
There was once a man called Frederick: he had a…
Cresta Posts Box by CP