The Story of a Brahmadaitya (Folk-Tales of Bengal, 1912) by Rev. Lal Behari Day 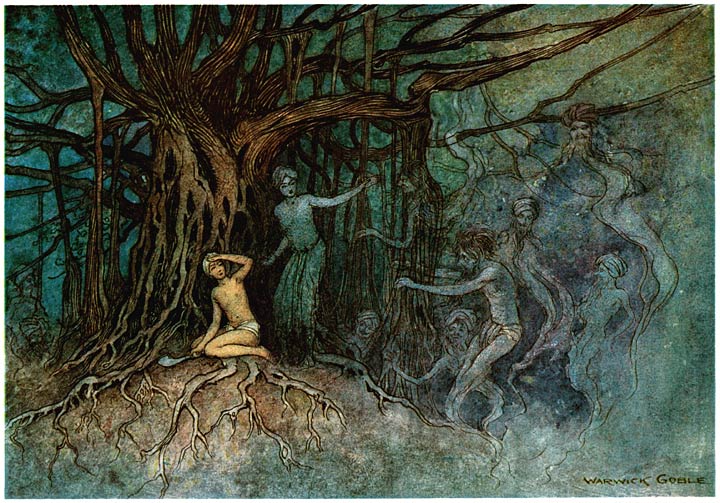 Once on a time there lived a poor Brahman who had a wife. As he had no means of livelihood, he used every day to beg from door to door, and thus got some rice which they boiled and ate, together with some greens which they gleaned from the fields. After some time it chanced that the village changed its owner, and the Brahman bethought himself of asking some boon of the new laird. So one morning the Brahman went to the laird’s house to pay him court. It so happened that at that time the laird was making inquiries of his servants about the village and its various parts. The laird was told that a certain banyan-tree in the outskirts of the village was haunted by a number of ghosts; and that no man had ever the boldness to go to that tree at night. In bygone days some rash fellows went to the tree at night, but the necks of them all were wrung, and they all died. Since that time no man had ventured to go to the tree at night, though in the day some neat-herds took their cows to the spot. The new laird on hearing this said, that if any one would go at night to the tree, cut one of its branches and bring it to him, he would make him a present of a hundred bighas of rent-free land. None of the servants of the laird accepted the challenge, as they were sure they would be throttled by the ghosts. The Brahman, who was sitting there, thought within himself thus—“I am almost starved to death now, as I never get my bellyful. If I go to the tree at night and succeed in cutting off one of its branches I shall get one hundred bighas of rent-free land, and become independent for life. If the ghosts kill me, my case will not be worse, for to die of hunger is no better than to be killed by ghosts.” He then offered to go to the tree and cut off a branch that night. The laird renewed his promise, and said to the Brahman that if he succeeded in bringing one of the branches of that haunted tree at night he would certainly give him one hundred bighas of rent-free land. “The moment the first stroke was given, a great many ghosts rushed towards the Brahman”

In the course of the day when the people of the village heard of the laird’s promise and of the Brahman’s offer, they all pitied the poor man. They blamed him for his foolhardiness, as they were sure the ghosts would kill him, as they had killed so many before. His wife tried to dissuade him from the rash undertaking; but in vain. He said he would die in any case; but there was some chance of his escaping, and of thus becoming independent for life. Accordingly, one hour after sundown, the Brahman set out. He went to the outskirts of the village without the slightest fear as far as a certain vakula-tree (Mimusops Elengi), from which the haunted tree was about one rope distant. But under the vakula-tree the Brahman’s heart misgave him. He began to quake with fear, and the heaving of his heart was like the upward and downward motion of the paddy-husking pedal. The vakula-tree was the haunt of a Brahmadaitya, who, seeing the Brahman stop under the tree, spoke to him, and said, “Are you afraid, Brahman? Tell me what you wish to do, and I’ll help you. I am a Brahmadaitya.” The Brahman replied, “O blessed spirit, I wish to go to yonder banyan-tree, and cut off one of its branches for the zemindar, who has promised to give me one hundred bighas of rent-free land for it. But my courage is failing me. I shall thank you very much for helping me.” The Brahmadaitya answered, “Certainly I’ll help you, Brahman. Go on towards the tree, and I’ll come with you.” The Brahman, relying on the supernatural strength of his invisible patron, who is the object of the fear and reverence of common ghosts, fearlessly walked towards the haunted tree, on reaching which he began to cut a branch with the bill which was in his hand. But the moment the first stroke was given, a great many ghosts rushed towards the Brahman, who would have been torn to pieces but for the interference of the Brahmadaitya. The Brahmadaitya said in a commanding tone, “Ghosts, listen. This is a poor Brahman. He wishes to get a branch of this tree which will be of great use to him. It is my will that you let him cut a branch.” The ghosts, hearing the voice of the Brahmadaitya, replied, “Be it according to thy will, lord. At thy bidding we are ready to do anything. Let not the Brahman take the trouble of cutting; we ourselves will cut a branch for him.” So saying, in the twinkling of an eye, the ghosts put into the hands of the Brahman a branch of the tree, with which he went as fast as his legs could carry him to the house of the zemindar. The zemindar and his people were not a little surprised to see the branch; but he said, “Well, I must see to-morrow whether this branch is a branch of the haunted tree or not; if it be, you will get the promised reward.”

Next morning the zemindar himself went along with his servants to the haunted tree, and found to their infinite surprise that the branch in their hands was really a branch of that tree, as they saw the part from which it had been cut off. Being thus satisfied, the zemindar ordered a deed to be drawn up, by which he gave to the Brahman for ever one hundred bighas of rent-free land. Thus in one night the Brahman became a rich man.

It so happened that the fields, of which the Brahman became the owner, were covered with ripe paddy, ready for the sickle. But the Brahman had not the means to reap the golden harvest. He had not a pice in his pocket for paying the wages of the reapers. What was the Brahman to do? He went to his spirit-friend the Brahmadaitya, and said, “Oh, Brahmadaitya, I am in great distress. Through your kindness I got the rent-free land all covered with ripe paddy. But I have not the means of cutting the paddy, as I am a poor man. What shall I do?” The kind Brahmadaitya answered, “Oh, Brahman, don’t be troubled in your mind about the matter. I’ll see to it that the paddy is not only cut, but that the corn is threshed and stored up in granaries, and the straw piled up in ricks. Only you do one thing. Borrow from men in the village one hundred sickles, and put them all at the foot of this tree at night. Prepare also the exact spot on which the grain and the straw are to be stored up.”

The joy of the Brahman knew no bounds. He easily got a hundred sickles, as the husbandmen of the village, knowing that he had become rich, readily lent him what he wanted. At sunset he took the hundred sickles and put them beneath the vakula-tree. He also selected a spot of ground near his hut for his magazine of paddy and for his ricks of straw; and washed the spot with a solution of cow-dung and water. After making these preparations he went to sleep.

In the meantime, soon after nightfall, when the villagers had all retired to their houses, the Brahmadaitya called to him the ghosts of the haunted tree, who were one hundred in number, and said to them, “You must to-night do some work for the poor Brahman whom I am befriending. The hundred bighas of land which he has got from the zemindar are all covered with standing ripe corn. He has not the means to reap it. This night you all must do the work for him. Here are, you see, a hundred sickles; let each of you take a sickle in hand and come to the field I shall show him. There are a hundred of you. Let each ghost cut the paddy of one bigha, bring the sheaves on his back to the Brahman’s house, thresh the corn, put the corn in one large granary, and pile up the straw in separate ricks. Now, don’t lose time. You must do it all this very night.” The hundred ghosts at once said to the Brahmadaitya, “We are ready to do whatever your lordship commands us.” The Brahmadaitya showed the ghosts the Brahman’s house, and the spot prepared for receiving the grain and the straw, and then took them to the Brahman’s fields, all waving with the golden harvest. The ghosts at once fell to it. A ghost harvest-reaper is different from a human harvest-reaper. What a man cuts in a whole day, a ghost cuts in a minute. Mash, mash, mash, the sickles went round, and the long stalks of paddy fell to the ground. The reaping over, the ghosts took up the sheaves on their huge backs and carried them all to the Brahman’s house. The ghosts then separated the grain from the straw, stored up the grain in one huge store-house, and piled up the straw in many a fantastic rick. It was full two hours before sunrise when the ghosts finished their work and retired to rest on their tree. No words can tell either the joy of the Brahman and his wife when early next morning they opened the door of their hut, or the surprise of the villagers, when they saw the huge granary and the fantastic ricks of straw. The villagers did not understand it. They at once ascribed it to the gods. 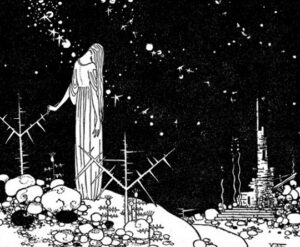 REPENTANCE (Old French Fairy Tales, 1920) by Comtesse de Ségur
BLONDINE was stupefied! Her conduct now appeared to her in all…
Cresta Posts Box by CP