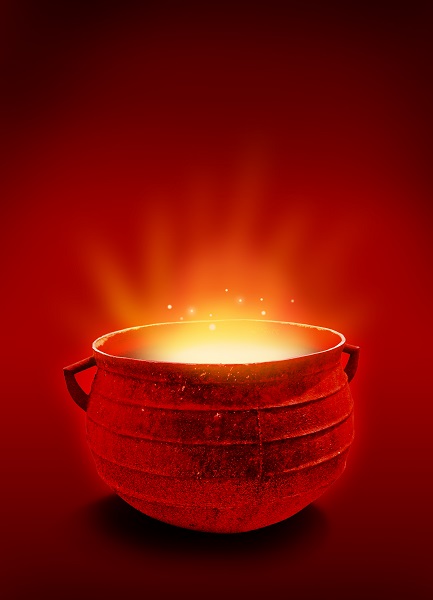 Folk- and fairy tales hand down a morality and principles for living together in a society. Since greed is such a wide-spread human trait, it became one of the most famous motives in folk and fairy tales. The uncontrolled longing or desire to gain and accumulate more food, wealth, prestige by few can easily spoil efforts to make life better for everyone.

In the Christian world, greed is one of the seven deadly sins and any Christian should abstain from it. In more collectivist Eastern philosophies, greed as a selfhish trait, is contradictory to principle of the greater good. As we will see by looking at this list of fairy tales, greed was known from ancient Greece, to the Europe of the Brothers Grimm, from China to Africa, …

The flies and the Honey-Pot

Aesop is known for his short and concise fables. In “The flies and the Honey-Pot” the flies are attracted to a jar of honey. Driven by greed they indulge into the pleasure, At last they recognize their foolishness, but it is too late.

The moral of “The flies and the Honey-Pot” is often translated as Pleasure bought with pains, hurts. Aesop tells us not to be greedy for a little pleasure, because it might destroy us. Remember that WE are the flies and in our modern era there are countless “honey-pots” that we are attracted to: sweets and sodas that are advertised on TV, our mobile phones and the social media that we can’t turn off anymore, computer games that are programmed to be addictive, you name it. Probably each of us has fallen into one or another honey-pot at times.

An unharmful “honey-pot” that to fall into that I would like to suggest would be reading more stories on fairytalenight.com

In the “Juniper Tree” by the Brothers Grimm a wife kills their step-children to make sure the inheritance is hers. However, her greed comes back to bite her. It is a fairy tale about greed and lying and therefore it is also featured on our list favorite folk- and fariy tales about lying.

In Rumpelstiltskin by the Brothers Grimm a miller’s daughter allegedly learns how to spin gold from straw, which soon attracts the attention of a greedy king.

The Punishment of Greed

“The Punishment of Greed” is a (for a lack of a better description) Chinese Zombie story. Greed leads a teacher to try robbing the dead, but when breaks the coffin, the dead body raises from within. The corpse haunts the man to his home.

It would also make an excellent Halloween tale.

“How greed for a trifiling thing led a man to lose a great one” is a tale of two brothers – one humble, one greedy – and a little magic.

In many folk tales “The Hare” is presented as cunning and often succeeds over other bigger and stronger animals by virute of his wits. In “The greedy hare” though, the hare does not have the better end for himself.

This story, told by Nobo Zulu, was collected on by Dyna Malamusi on malamusi.com which is a website devoted to African oral tradition.

“The greedy lion” is another tale originally collected on malamusi.com and tells us about a lion that can’t get enough and therefore is easily deceived.

Why the sea is salt

The Norse tale “Why the sea is salt” is one of my all-time favorite folk tales. That’s probably why it is ALSO included in the “Fairy tales with food recipies” and the “Best folk- and fairy tales about WATER – for the World Water day” lists.

THE PUNISHMENT OF GREED (The Chinese Fairy Book, 1921) by Richard Wilhelm
ONCE upon a time there lived a man south of…
Cresta Posts Box by CP