THE GREAT FLOOD (The Chinese Fairy Book, 1921) by Richard Wilhelm

ONCE upon a time there was a widow, who had a child. And the child was a kind-hearted boy of whom every one was fond. One day he said to his mother: “All the other children have a grandmother, but I have none. And that makes me feel very sad!”

“We will hunt up a grandmother for you,” said his mother. Now it once happened that an old beggar-woman came to the house, who was very old and feeble. And when the child saw her, he said to her: “You shall be my grandmother!” And he went to his mother and said: “There is a beggar-woman outside, whom I want for my grandmother!” And his mother was willing and called her into the house; though the old woman was very dirty. So the boy said to his mother: “Come, let us wash grandmother!” And they washed the woman. But she had a great many burrs in her hair, so they picked them all out and put them in a jar, and they filled the whole jar. Then the grandmother said: “Do not throw them away, but bury them in the garden. And you must not dig them up again before the great flood comes.”

“When is the great flood coming?” asked the boy.

“When the eyes of the two stone lions in front of the prison grow red, then the great flood will come,” said the grandmother.

So the boy went to look at the lions, but their eyes were not yet red. And the grandmother also said to him: “Make a little wooden ship and keep it in a little box.” And this the boy did. And he ran to the prison every day and looked at the lions, much to the astonishment of the people in the street.

One day, as he passed the chicken-butcher’s shop, the butcher asked him why he was always running to the lions. And the boy said: “When the lions’ eyes grow red then the great flood will come.” But the butcher laughed at him. And the following morning, quite early, he took some chicken-blood and rubbed it on the lions’ eyes. When the boy saw that the lions’ eyes were red he ran swiftly home, and told his mother and grandmother. And then his grandmother said: “Dig up the jar quickly, and take the little ship out of its box.” And when they dug up the jar, it was filled with the purest pearls and the little ship grew larger and larger, like a real ship. Then the grandmother said: “Take the jar with you and get into the ship. And when the great flood comes, then you may save all the animals that are driven into it; but human beings, with their black heads, you are not to save.” So they climbed into the ship, and the grandmother suddenly disappeared.

Now it began to rain, and the rain kept falling more and more heavily from the heavens. Finally there were no longer any single drops falling, but just one big sheet of water which flooded everything.

Then a dog came drifting along, and they saved him in their ship. Soon after came a pair of mice, with their little ones, loudly squeaking in their fear. And these they also saved. The water was already rising to the roofs of the houses, and on one roof stood a cat, arching her back and mewing pitifully. They took the cat into the ship, too. Yet the flood increased and rose to the tops of the trees. And in one tree sat a raven, beating his wings and cawing loudly. And him, too, they took in. Finally a swarm of bees came flying their way. The little creatures were quite wet, and could hardly fly. So they took in the bees on their ship. At last a man with black hair floated by on the waves. The boy said: “Mother, let us save him, too!” But the mother did not want to do so. “Did not grandmother tell us that we must save no black-headed human beings?” But the boy answered: “We will save the man in spite of that. I feel sorry for him, and cannot bear to see him drifting along in the water.” So they also saved the man.

Gradually the water subsided. Then they got out of their ship, and parted from the man and the beasts. And the ship grew small again and they put it away in its box.

But the man was filled with a desire for the pearls. He went to the judge and entered a complaint against the boy and his mother, and they were both thrown into jail. Then the mice came, and dug a hole in the wall. And the dog came through the hole and brought them meat, and the cat brought them bread, so they did not have to hunger in their prison. But the raven flew off and returned with a letter for the judge. The letter had been written by a god, and it said: “I wandered about in the world of men disguised as a beggar woman. And this boy and his mother took me in. The boy treated me like his own grandmother, and did not shrink from washing me when I was dirty. Because of this I saved them out of the great flood by means of which I destroyed the sinful city wherein they dwelt. Do you, O judge, free them, or misfortune shall be your portion!”

So the judge had them brought before him, and asked what they had done, and how they had made their way through the flood. Then they told him everything, and what they said agreed with the god’s letter. So the judge punished their accuser, and set them both at liberty.

When the boy had grown up he came to a city of many people, and it was said that the princess intended to take a husband. But in order to find the right man, she had veiled herself, and seated herself in a litter, and she had had the litter, together with many others, carried into the market place. In every litter sat a veiled woman, and the princess was in their midst. And whoever hit upon the right litter, he was to get the princess for his bride. So the youth went there, too, and when he reached the market place, he saw the bees whom he had saved from the great flood, all swarming about a certain litter. Up he stepped to it, and sure enough, the princess was sitting in it. And then their wedding was celebrated, and they lived happily ever afterward.

Note: “The Great Flood” is traditionally narrated and a diluvian legend seems to underlie it. Compare with Grimm’s fairy-tale (No. 73) “The Queen of the Bees.” 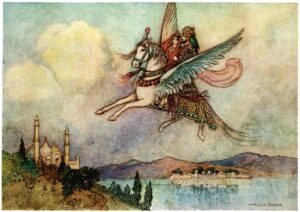 The Story of a Hiraman (Folk-Tales of Bengal, 1912) by Rev. Lal Behari Day
There was a fowler who had a wife. The fowler’s…
Cresta Posts Box by CP