How the Rabbit Lost His Tail (Fairy Tales from Brazil, 1917) by Elsie Spicer Eells 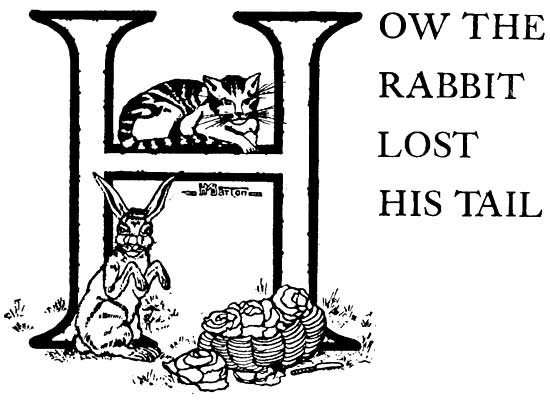 Once upon a time, ages and ages ago, the rabbit had a long tail, but the cat had none. She looked with envious eyes at the one which the rabbit had. It was exactly the sort of a tail she longed to have.

The rabbit was always a thoughtless careless little beast. One day he went to sleep with his beautiful long tail hanging straight out behind him. Along came Mistress Puss carrying a sharp knife, and with one blow she cut off Mr. Rabbit’s tail. Mistress Puss was very spry and she had the tail nearly sewed on to her own body before Mr. Rabbit saw what she was doing.

“Don’t you think it looks better on me than it did on you?” asked Mistress Puss.

“It surely is very becoming to you,” replied the generous unselfish rabbit. “It was a little too long for me anyway and I’ll tell you what I’ll do. I’ll let you keep it if you will give me that sharp knife in exchange for it.”

The cat gave Mr. Rabbit the knife and he started out into the deep forest with it. “I’ve lost my tail but I’ve gained a knife,” said he; “I’ll get a new tail or something else just as good.”

Mr. Rabbit hopped along through the forest for a long time and at last he came to a little old man who was busily engaged in making baskets. He was making the baskets out of rushes and he was biting them off with his teeth. He looked up and spied Mr. Rabbit with the knife in his mouth.

“O, please, Mr. Rabbit,” said he, “will you not be so kind as to let me borrow that sharp knife you are carrying? It is very hard work to bite the rushes off with my teeth.”

Mr. Rabbit let him take the knife. He started to cut off the rushes with it, when snap went the knife! It broke into halves.

The little old man said that he was very sorry and that he did not mean to do it.

Then Mr. Rabbit said, “A broken knife is of no use to me but perhaps you can use it, even if it is broken. I’ll tell you what I’ll do. I’ll let you keep the knife if you will give me one of your baskets in exchange for it.”

The little old man gave Mr. Rabbit a basket and he started on through the deep forest with it. “I lost my tail but I gained a knife. I’ve lost my knife but I’ve gained a basket,” said he. “I’ll get a new tail or something else just as good.”

Mr. Rabbit hopped along through the deep forest for a long time until at last he came to a clearing. Here there was an old woman busily engaged in picking lettuce. When she had gathered it she put it into her apron. She looked up and spied Mr. Rabbit hopping along with his basket.

“O, please, Mr. Rabbit,” said she, “will you not be so kind as to let me borrow that nice basket you are carrying?”

Mr. Rabbit let her take the basket. She began to put her lettuce into it when out fell the bottom of the basket.

The old woman said that she was very sorry and that she did not mean to do it.

Then said Mr. Rabbit, “I’ll tell you what I’ll do. I’ll let you keep that broken basket if you will give me some of your lettuce.”

The rabbit was getting very hungry and how nice the lettuce smelled! He took a bite. It was just the very best thing he had ever tasted in all his life. “I don’t care if I did lose my tail,” said he, “I’ve found something I like very much better.” 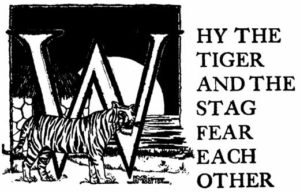 Why the Tiger and the Stag Fear Each Other (Fairy Tales from Brazil, 1917) by Elsie Spicer Eells
Once upon a time there was a large handsome stag…
Cresta Posts Box by CP