How the Tiger Got His Stripes (Fairy Tales from Brazil, 1917) by Elsie Spicer Eells Once upon a time, ages and ages ago, so long ago that the tiger had no stripes upon his back and the rabbit still had his tail, there was a tiger who had a farm. The farm was very much overgrown with underbrush and the owner sought a workman to clear the ground for him to plant.

The tiger called all the beasts together and said to them when they had assembled, “I need a good workman at once to clear my farm of the underbrush. To the one of you who will do this work I offer an ox in payment.”

The monkey was the first one to step forward and apply for the position. The tiger tried him for a little while but he was not a good workman at all. He did not work steadily enough to accomplish anything. The tiger discharged him very soon and he did not pay him.

Then the tiger hired the goat to do the work. The goat worked faithfully enough but he did not have the brains to do the work well. He would clear a little of the farm in one place and then he would go away and work on another part of it. He never finished anything neatly. The tiger discharged him very soon without paying him.

Next the tiger tried the armadillo. The armadillo was very strong and he did the work well. The trouble with him was that he had such an appetite. There were a great many ants about the place and the armadillo could never pass by a sweet tender juicy ant without stopping to eat it. It was lunch time all day long with him. The tiger discharged him and sent him away without paying him anything.

At last the rabbit applied for the position. The tiger laughed at him and said, “Why, little rabbit, you are too small to do the work. The monkey, the goat, and the armadillo have all failed to give satisfaction. Of course a little beast like you will fail too.”

However, there were no other beasts who applied for the position so the tiger sent for the rabbit and told him that he would try him for a little while.

The rabbit worked faithfully and well, and soon he had cleared a large portion of the ground. The next day he worked just as well. The tiger thought that he had been very lucky to hire the rabbit. He got tired staying around to watch the rabbit work. The rabbit seemed to know just how to do the work anyway, without orders, so the tiger decided to go away on a hunting trip. He left his son to watch the rabbit.

After the tiger had gone away the rabbit said to the tiger’s son, “The ox which your father is going to give me is marked with a white spot on his left ear and another on his right side, isn’t he?”

“O, no,” replied the tiger’s son. “He is red all over with just a tiny white spot on his right ear.”

The rabbit worked for a while longer and then he said, “The ox which your father is going to give me is kept by the river, isn’t he?”

The rabbit had made a plan to go and get the ox without waiting to finish his work. Just as he started off he saw the tiger returning. The tiger noticed that the rabbit had not worked so well when he was away. After that he stayed and watched the rabbit until the whole farm was cleared. Then the tiger gave the rabbit the ox as he had promised.

“You must kill this ox,” he said to the rabbit, “in a place where there are neither flies nor mosquitoes.”

The rabbit went away with the ox. After he had gone for some distance he thought he would kill him. He heard cock, however, crowing in the distance and he knew that there must be a farm yard near. There would be flies of course. He went on farther and again he thought that he would kill the ox. The ground looked moist and damp and so did the leaves on the bushes. Since the rabbit thought there would be mosquitoes there he decided not to kill the ox. He went on and on and finally he came to a high place where there was a strong breeze blowing. “There are no mosquitoes here,” he said to himself. “The place is so far removed from any habitation that there are no flies, either.” He decided to kill the ox.

Just as he was ready to eat the ox, along came the tiger. “O, rabbit, you have been such a good friend of mine,” said the tiger, “and now I am so very, very hungry that all my ribs show, as you yourself can see. Will you not be a good kind rabbit and give me a piece of your ox?”

The rabbit gave the tiger a piece of the ox. The tiger devoured it in the twinkling of an eye. Then he leaned back and said, “Is that all you are going to give me to eat?”

The tiger looked so big and savage that the rabbit did not dare refuse to give him any more of the ox. The tiger ate and ate and ate until he had devoured that entire ox. The rabbit had been able to get only a tiny morsel of it. He was very, very angry at the tiger.

One day not long after the rabbit went to a place not far from the tiger’s house and began cutting down big staves of wood. The tiger soon happened along and asked him what he was doing.

“I’m getting ready to build a stockade around myself,” replied the rabbit. “Haven’t you heard the orders?” The tiger said that he hadn’t heard any orders.

“That is very strange,” said the rabbit. “The order has gone forth that every beast shall fortify himself by building a stockade around himself. All the beasts are doing it.”

The tiger became very much alarmed. “O, dear! O, dear! What shall I do,” he cried. “I don’t know how to build a stockade. I never could do it in the world. O, good rabbit! O, kind rabbit! You are such, a very good friend of mine. Couldn’t you, as a great favour, because of our long friendship, build a stockade about me before you build one around yourself?”

The rabbit replied that he could not think of risking his own life by building the tiger’s fortifications first. Finally, however, he consented to do it.

The rabbit cut down great quantities of long sharp sticks. He set them firmly in the ground about the tiger. He fastened others securely over the top until the tiger was completely shut in by strong bars. Then he went away and left the tiger.

The tiger waited and waited for something to happen to show him the need of the fortifications. Nothing at all happened.

He got very hungry and thirsty. After a while the monkey passed that way.

The tiger called out, “O, monkey, has the danger passed?”

The monkey did not know what danger the tiger meant, but he replied, “Yes.”

Then the tiger said, “O, monkey, O, good, kind monkey, will you not please be so kind as to help me out of my stockade?”

“Let the one who got you in there help you out,” replied the monkey and he went on his way.

Along came the goat and the tiger called out, “O, goat, has the danger passed?”

The goat did not know anything about any danger, but he replied, “Yes.”

Then the tiger said, “O, goat, O, good kind goat, please be so kind as to help me out of my stockade.”

“Let the one who got you in there help you out,” replied the goat as he went on his way.

Along came the armadillo and the tiger called out, “O, armadillo, has the danger passed?”

The armadillo had not heard of any danger, but he replied that it had passed.

Then the tiger said, “O, armadillo, O, good, kind armadillo, you have always been such a good friend and neighbour. Please help me now to get out of my stockade.”

“Let the one who got you in there help you out,” replied the armadillo as he went on his way. 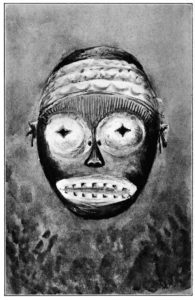 Ituen and the King’s Wife (FOLK STORIES FROM SOUTHERN NIGERIA WEST AFRICA, 1910) BY ELPHINSTONE DAYRELL
Ituen was a young man of Calabar. He was the…
Cresta Posts Box by CP