How the Toad Got His Bruises (Fairy Tales from Brazil, 1917) by Elsie Spicer Eells 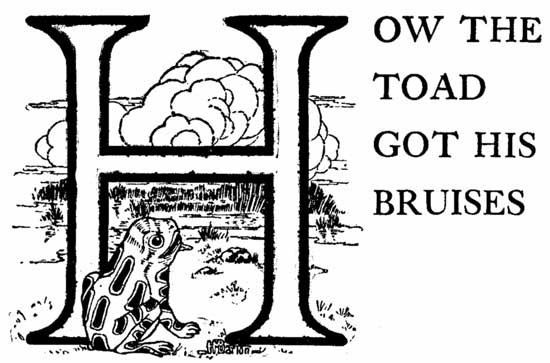 Once upon a time, ages and ages ago, the toad had a smooth skin. In those days he was a great gad about. He never could be found in his own house. If any one had a party he was sure to go, no matter how far away from home it was held, or how long it took to get there.

One day the toad received an invitation to attend a party in the sky. “You never can get to this party,” said his friend, the armadillo. “You know how slowly you travel here upon earth.”

“Wait and see whether or not I go to the party,” said the toad.

Not far from the toad’s house there lived a big black buzzard. No one liked the buzzard. He was very unpopular with all the birds and beasts. The toad hopped over to the buzzard’s house. The buzzard was outside the door making music on his violin.

“Good morning, Friend Buzzard,” said the toad. “Are you going to attend the party in the sky?”

The buzzard replied that he was planning to go.

“That is good,” said the toad. “May I have the pleasure of your company for the trip?”

The buzzard was delighted to have the toad seek his company. It was a new experience.

“I’ll be charmed to go to the party with you,” replied the buzzard. “What time shall we start?”

“We’ll start at four o’clock,” said the toad. “Come to my house and we’ll go on from there. Be sure to bring your violin with you.”

Promptly at four o’clock the buzzard arrived at the toad’s house. He had his violin with him, of course, because the toad had asked him to bring it.

“I’m not quite ready to go,” the toad called out. “Just leave your violin there by the door and step inside. It will take me only a minute to finish my toilet.”

The buzzard laid his violin carefully outside the door and went inside the toad’s house. The toad jumped through the window and hid himself inside the violin.

The buzzard waited and waited for the toad to get ready but he did not hear a word from the toad. Finally he got tired of waiting. He picked up his violin and started.

When he arrived at the party he was a trifle late but he explained how he had waited for the toad.

“How foolish to wait a minute for the toad,” said his hosts. “How could the toad ever get to a party in the sky? We just asked him as a joke because he is such a great gad about. Lay down your violin and come to the feast.”

The buzzard laid down his violin. As soon as there was no one looking, out hopped the toad. He was laughing from ear to ear. “So they thought I would not come to the party! What a joke! How surprised they will be to see me here!” he said.

There was nobody at the feast who was as gay as the toad. When the buzzard asked how he arrived he said: “I’ll tell you some other day.” Then he went on eating and dancing.

The buzzard did not have a very good time at the party. He decided that he would go home early. He went away without saying good-bye to his hosts and without taking his violin with him.

After a while the falcon noticed the violin. “That violin belongs to the buzzard. He must have forgotten to take it home. I’ll carry it back for him,” he said.

The falcon flew towards earth with the violin. The toad shook about terribly inside of the violin. He got very tired. The falcon got tired, too.

“I’m not going to carry this heavy old violin of the buzzard’s another minute,” said the falcon. “I was foolish to offer to carry it in the first place. The buzzard is no friend of mine.”

He let the violin fall. Down, down toward earth it fell.

When the toad crawled out of the wrecked violin he was so covered with bruises that he could hardly hop home.

The buzzard never knew what became of his violin or why the toad had lost his good looks. To this very day the toad shows his bruises. And he is entirely cured of being a gad about. 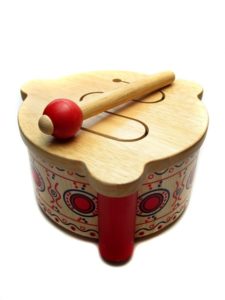 The King’s Magic Drum (FOLK STORIES FROM SOUTHERN NIGERIA WEST AFRICA, 1910) BY ELPHINSTONE DAYRELL
Efriam Duke was an ancient king of Calabar. He was…
Cresta Posts Box by CP