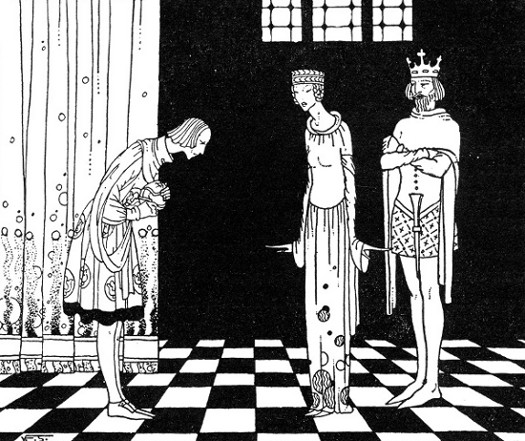 THERE was once a king called Benin. He was good and all the world loved him; he was just and the wicked feared him. His wife, the Queen Doucette, was also good, and much beloved.

This happy pair had a daughter called the Princess Blondine, because of her superb fair hair, and she was as amiable and charming as her father the king and her mother the queen.

Unfortunately, the poor queen died a short time after the birth of Blondine and for a long time the king wept bitterly at his great loss. Blondine was too young to understand her mother’s death: she did not weep but continued to laugh, to play and to sleep peacefully. The king loved her tenderly and she loved him more than all the world. He gave his little daughter the most beautiful jewels, the finest bonbons, and the most rare and delicious fruits. Blondine was very happy.

One day it was announced to the king, that all his subjects demanded that he should marry again in order to have a son who should reign after him. He refused at first but finally yielded to the pressing desires of his people and said to his minister Leger:—

“My dear friend, my subjects wish me to marry again but my heart is so sad because of the death of my cherished queen Doucette that I cannot undertake the task of seeking another wife. Go, then, my good Leger and find me a princess who will make my sweet Blondine happy. Go; I ask for nothing more. When you have found a perfect woman, you will demand her hand in marriage and conduct her to my court.”

At last he arrived at the kingdom of the monarch Turbulent, who had a lovely daughter, bright, winning and apparently good. Leger found her so charming, that he asked her hand in marriage for his king Benin, without sufficiently inquiring into her real character. Turbulent was enchanted at the prospect of getting rid of his daughter who was jealous, proud and wicked. Also, her presence often interfered with his excursions for pleasure, with the chase and with his various entertainments at the palace.

Without a moment’s hesitation, he acceded to the Prime Minister’s request, and he returned with the princess to the kingdom of the good king Benin.

The princess Fourbette was accompanied by four thousand mules, loaded with the jewels and wardrobe of the charming bride.

King Benin had been apprised of their approach by a courier and went forward to receive the princess Fourbette. He found her beautiful but he noted the absence of the mild and attractive expression of the poor lost Doucette.

When Fourbette’s eyes fell upon Blondine her glance was so cruel, so wicked, that the poor child, who was now three years old, was greatly terrified and began to weep bitterly.

“What is the matter?” said the king. “Why does my sweet and sensible Blondine weep like a bad little girl?”

“Papa! dear papa!” cried Blondine, throwing herself into the arms of the king, “do not give me into the hands of this princess. I am afraid of her—her eyes are cruel!”

The king was much surprised. He turned so suddenly towards the princess Fourbette that she had no time to control herself and he perceived the terrible glance with which she regarded the little Blondine.

Benin immediately resolved that Blondine should be wholly separated from the new queen and remain as before under the exclusive protection of the nurse who had taken care of her and who loved her tenderly.

The queen thus saw Blondine rarely, and when she met her by chance she could not wholly dissimulate the hatred she felt for her.

About a year from that time a daughter was born to the queen Fourbette. She was named Brunette, because of her dark hair which was black as the raven’s wing.

Brunette was pretty but not so lovely as Blondine; moreover she was as wicked as her mother. She detested Blondine and played all sorts of cruel tricks upon her, bit her, pinched her, pulled her hair, broke her toys and tore her beautiful dresses.

The good little Blondine was never in a passion with her sister but always tried to make excuses for her conduct.

“Oh, papa!” she said to the king, “do not scold Brunette; she is so little! she does not know that she grieves me when she breaks my toys! It is only in play that she bites me, pulls my hair and pinches me.”

The good king embraced his little daughter, and was silent but he knew that Brunette was cruel and wicked; that Blondine was too gentle and good to accuse her. He loved Blondine, therefore, more and more from day to day and his heart grew cold to Brunette.

The ambitious queen Fourbette saw all this clearly and hated intensely the innocent and gentle Blondine. If she had not feared the rage of the king she would have made Blondine the most wretched child in the world.

Benin had commanded that Blondine should never be left alone with the queen. He was known to be just and good but he punished disobedience severely and the queen herself dared not defy his commands. 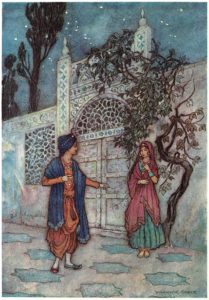 Life’s Secret (Folk-Tales of Bengal, 1912) by Rev. Lal Behari Day
There was a king who had two queens, Duo and…
Cresta Posts Box by CP