LION AND JACKAL (South-African Folk-Tales, 1910) by James A. Honey

The Lion and the Jackal agreed to hunt on shares, for the purpose of laying in a stock of meat for the winter months for their families.

As the Lion was by far the more expert hunter of the two, the Jackal suggested that he (himself) should be employed in transporting the game to their dens, and that Mrs. Jackal and the little Jackals should prepare and dry the meat, adding that they would take care that Mrs. Lion and her family should not want.

This was agreed to by the Lion, and the hunt commenced.

After a very successful hunt, which lasted for some time, the Lion returned to see his family, and also to enjoy, as he thought, a plentiful supply of his spoil; when, to his utter surprise, he found Mrs. Lion and all the young Lions on the point of death from sheer hunger, and in a mangy state. The Jackal, it appeared, had only given them a few entrails of the game, and in such limited quantities as barely to keep them alive; always telling them that they (i. e., the Lion and himself) had been most unsuccessful in their hunting; while his own family was reveling in abundance, and each member of it was sleek and fat.

This was too much for the Lion to bear. He immediately started off in a terrible fury, vowing certain death to the Jackal and all his family, wherever he should meet them. The Jackal was more or less prepared for a storm, and had taken the precaution to remove all his belongings to the top of a krantz (i. e., a cliff), accessible only by a most difficult and circuitous path, which he alone knew.

When the Lion saw him on the krantz, the Jackal immediately greeted him by calling out, “Good morning, Uncle Lion.”

“How dare you call me uncle, you impudent scoundrel,” roared out the Lion, in a voice of thunder, “after the way in which you have behaved to my family?”

“Oh, Uncle! How shall I explain matters? That beast of a wife of mine!” Whack, whack was heard, as he beat with a stick on dry hide, which was a mere pretence for Mrs. Jackal’s back; while that lady was preinstructed to scream whenever he operated on the hide, which she did with a vengeance, joined by the little Jackals, who set up a most doleful chorus. “That wretch!” said the Jackal. “It is all her doing. I shall kill her straight off,” and away he again belabored the hide, while his wife and children uttered such a dismal howl that the Lion begged of him to leave off flogging his wife. After cooling down a little, he invited Uncle Lion to come up and have something to eat. The Lion, after several ineffectual attempts to scale the precipice, had to give it up.

The Jackal, always ready for emergencies, suggested that a reim should be lowered to haul up his uncle. This was agreed to, and when the Lion was drawn about halfway up by the whole family of Jackals, the reim was cleverly cut, and down went the Lion with a tremendous crash which hurt him very much. Upon this, the Jackal again performed upon the hide with tremendous force, for their daring to give him such a rotten reim, and Mrs. Jackal and the little ones responded with some fearful screams and yells. He then called loudly out to his wife for a strong buffalo reim which would support any weight. This again was lowered and fastened to the Lion, when all hands pulled away at their uncle; and, just when he had reached so far that he could look over the precipice into the pots to see all the fat meat cooking, and all the biltongs hanging out to dry, the reim was again cut, and the poor Lion fell with such force that he was fairly stunned for some time. After the Lion had recovered his senses, the Jackal, in a most sympathizing tone, suggested that he was afraid that it was of no use to attempt to haul him up onto the precipice, and recommended, instead, that a nice fat piece of eland’s breast be roasted and dropped into the Lion’s mouth. The Lion, half famished with hunger, and much bruised, readily accepted the offer, and sat eagerly awaiting the fat morsel In the mean time, the Jackal had a round stone made red-hot, and wrapped a quantity of inside fat, or suet, round it, to make it appear like a ball of fat. When the Lion saw it held out, he opened his capacious mouth to the utmost extent, and the wily Jackal cleverly dropped the hot ball right into it, which ran through the poor old beast, killing him on the spot.

It need hardly be told that there was great rejoicing on the precipice that night. 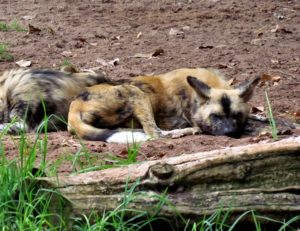 A JACKAL AND A WOLF (South-African Folk-Tales, 1910) by James A. Honey
Jackal and Wolf went and hired themselves to a man…
Cresta Posts Box by CP