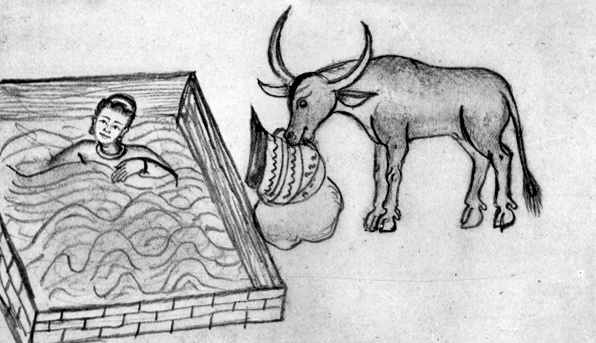 MANY, many years ago, at the beginning of the world, a little sparrow built her nest on the top of a tall tree that grew near the edge of a lake. In it she laid five little eggs, and never was mother bird prouder than she, and all day long she flew from tree to tree chirping out her joy. So proud in fact was she, and so much noise did she make, that a monkey that lived on the other side of the lake was struck with the remembrance of how he had once dined with great satisfaction on eggs laid by the sparrow’s sister, and in a few minutes he was on his way to repeat the performance.

In vain the little bird cried and begged him to spare her brood, promising to show him where the sweetest plantains in all the country were growing; the monkey only laughed at her and climbed the tree to get the prize.

The next moment the robber would have gotten his spoil, and this wonderful story would never have been told, but just then the great lord Sa Kyah looked earthward and saw the tragedy that was taking place.

Like a drop of rain that falls from a tree when the wind blows after a shower, the mighty lord descended, and when the would-be robber reached the nest his hand entered an empty one.

The eggs were soon brought back from the hpea country where the lord Sa Kyah had taken them for safety, and in due time were hatched. Out of the first protruded a sharp bill, and a kingfisher, bright of plumage and swift of wing, broke out of its speckled prison. The next egg broke and a buffalo came out, to be followed by a lordly striped tiger from the next. A terrible hpea-loo, with head and claws like a bird and body like a man, tore his way out of the next one, already looking around for a man whom he might devour for his first meal.

Only one egg remained, and that the smallest of all, but out of it came a man, and the mighty lord Sa Kyah smiled when he saw him, and said that although he was the smallest and the last, yet he must feed his brothers and take care of them.

One hot day in summer the buffalo that had come out of one of the eggs, walking through the jungle, much troubled by mosquitoes, thought how nice would be a wallow in a hole well known to him under the shade of the trees by the bank of the lake, where the sun had not dried the mud to the hardness of bricks as it had in every other wallow, and accordingly turned his huge body in its direction, and slowly set off toward it.

On his way there he saw on the ground what appeared to him to be a bed of flowers growing on the bank of the lake, and after smelling it carefully over, leisurely ate it all up.

The sun was hot, the earth dry, and the flowers had long ago died, and what the buffalo thought were flowers were really ten white jackets and ten red skirts. But when he had finished his meal he continued his journey to the wallow, and then with a grunt expressive of great satisfaction, sinking into the soft mud till only the tips of his horns and the top of his head were visible, he closed his eyes and enjoyed himself.

By and by there was a great commotion in the water—shouts, laughter, and jokes, together with a great splashing. The lazy buffalo opened one eye and saw ten young girls who were having great fun in the cool water, throwing it over one another and chasing each other here and there. When they came to the place where they had left their clothes, however, their mirth received a sudden check. They had all disappeared! They stood up to their armpits in the water looking at each other with very long faces till, spying the buffalo in his mud bath, they approached him, and in the most courteous language asked him whether he had seen their dresses.

The great beast closed the eye he had opened, and slowly uncovered the other one, but beyond this took no notice of the maids forlorn. Then, calling him “Kind Brother Buffalo,” they begged him to answer them, saying that all the people who left the village to go to the bazaar before the sun had risen would soon be passing on their way home. The buffalo blew a big cloud of mud and water from his nostrils, but said never a word.

Now it happened that the youngest of the sparrow’s brood, the man, was in the jungle all the time. He had seen his brother eat up all the clothes and had heard all the conversation. He had noticed too, that although all the maidens were beautiful, the youngest was the most beautiful girl he had ever seen. He saw how straight was her form, how black was her hair, and that her eyes were the color of the sky when there are many stars but no moon, and he determined to get her for his wife. He therefore now approached the party and told them that he could help them, and that no one besides could tell them where their clothes were, but that they must promise that the one whom he should pick out should be his wife.

To this they agreed, and thus it happened that he became possessed of the most beautiful woman in all the Shan country. So beautiful in fact was she, that it is said the birds stopped in the middle of a song when they saw her. The squirrels stopped half-way up the tree in their search for nuts as she walked under the trees, and her fame spread far and wide.

At this time a hunter came wandering through the jungle in search of game, and saw her standing at her door. He, like everybody else, was struck with her wonderful beauty, and he thought to himself, “For a long time I have been most unfortunate. I have caught but few animals, and their furs have been poor and mangy. Now, if I tell the king of my country about this beautiful girl, he will give me a great reward.”

Thus reasoning he set out home and told the king what he had seen, enlarging upon her great beauty till the king resolved to get her at any cost.

He therefore set out, taking with him soldiers and attendants as became such a mighty lord, and when he saw the object of his journey he acknowledged that the hunter had not deceived him, and he determined to take her back with him to the palace; but at the same time he made up his mind to go about it in a cunning way.

Now this king had a wonderful fighting cock of which he was very proud, and which had never been beaten. It had a beak of iron and spurs as sharp as the knives that come from Lai Hka, and a voice so loud and piercing that every morning when he crowed every other rooster in the city scurried away in fright at the challenge.

The king, therefore, said that he and the woman’s husband should have a cock fight. He would wager his country against the other’s wife. In great sorrow the man went out into the jungle to think over his misfortune, and while sitting on the ground in a most disconsolate manner he heard a little bird calling his name, and looking up he saw his brother, the kingfisher, perched above him.

“O brother, do not fear,” said the bright little bird. “I do not forget that you are my brother and have guarded me long, and now I will surely help you in your trouble.”

When the time came for the fight, therefore, and the king’s fighting cock stood proudly up, suddenly down from a tree flew the kingfisher, pecked him with his long, sharp bill, and then flew away before he could so much as turn his head. Time and again this happened till the king’s challenger finally stretched himself dead on the ground.

The fight ending in this way, however, did not suit the selfish king a bit, and he therefore said it was not a fair fight, and brought out a large, fierce dog. This dog was the terror of the State, but the king said that it should fight any other dog that could be brought against it for the same stakes as before. The tiger brother, however, was on the watch, and before the dog could get near his opponent, a blow from his paw ended his career.

Still the king persisted in his unjust course, and now declared that the wager should be finally settled by a fight between two buffaloes. Now the buffalo brother was ashamed of the way in which he had treated the girls in the water, and had long wished for an opportunity to retrieve his honor, so that he now fought with such bravery against the royal buffalo that he speedily conquered it.

Then the king, seeing that he was beaten every time, threw off all disguise and said plainly that he had come to get the girl for his wife, had brought soldiers to help him if necessary, and he would take her in spite of losing the different battles, and in spite of her husband or anybody else.

He stepped forward to take her, but he did not know that one more brother yet remained to be heard from, for out of the jungle with a dreadful yell came rushing the hpea-loo, his beak open, his claws outstretched, and king, soldiers, and courtiers all disappeared down his ravenous maw.

The next month the fortunate man with his beautiful wife became king in the place of his enemy, and lived to be the oldest monarch in the whole of the Shan country. 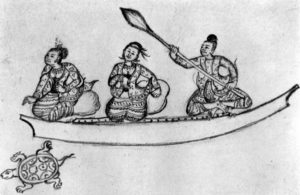 THE STORY OF THE TORTOISE (SHAN FOLK LORE STORIES, 1902) BY WILLIAM C. GRIGGS
THERE was once a man who had two wives. Now as everybody…
Cresta Posts Box by CP