HOW THE WORLD WAS CREATED (SHAN FOLK LORE STORIES, 1902) BY WILLIAM C. GRIGGS

IN the beginning of the world, many, many cycles ago, so long ago, in fact, that no man knows how long it was, there were no trees, no hills, no land, nothing but water. The wind blew the waters hither and thither, sometimes in great waves, sometimes in quiet ripples; the wind blew, the waves rolled, and that was all.

Now it happened that Gong Gow, the Great Spirit Spider, felt weary with carrying around her heavy burden of eggs wrapped up so carefully in their white covering fastened to her waist, therefore she said to herself:

“I would fain place my eggs in a safe place, but know of none where they can hatch themselves without danger,” so she searched through the universe to find a suitable place, and at last she spied the water that is now the world, and in it began to spin her web.

Backward and forward, forward and backward, round and round, in and out she wove, till at last all was done, and full of content she left her eggs in their web prison nest and journeyed away.

The wind blew and drove the water hither and thither as aforetime, and soon little pieces of solid substance caught in the meshes of the web, and behold! as the time passed the solid substance became more solid till it formed mud and separated itself from the water, and when the mud had dried, lo! it was the earth.

So the eggs of the great Spirit Spider were safely locked up within the earth; by and by they hatched, and breaking forth there appeared the first man, Boo Pau, and the first woman, Myeh Pau, from whom all the ancient people who belonged to the first race were descended.

Many, many years passed and people lived out their lives, till one day the great earth caught fire. It burned fiercer than anybody’s imagination can conceive, and it destroyed everything. All the beautiful forests with their green coverings of moss and leaves, all the cities which the first race had builded were burned down, till by and by there was naught more for the fire to consume, and it was then the end of the hot season; the time of wet came soon after, and the rain fell upon the burning earth in such torrents that the whole sky was covered with the steam.

Now it happened that in Möng Hpea, the far-away land where dwell the powerful spirits whom we call “hsangs,” the smell of the steam ascended and ascended till all the spirits smelled the sweet scent, and said to themselves:

“Behold, there appears a sweet smell arising from below, what can it be?” and there was much marveling at what could cause such sweet-smelling incense as that then ascending.

And it also happened that in Möng Hpea were nine spirits, five of them males and four females, and these being of more adventurous spirit than their fellows, determined to find out for themselves where the sweet perfume came from. So they set out on their travels downward. They descended faster and faster, and the faster they descended the sweeter became the smell, till at last they landed upon this world of ours, and bending down to the earth they tore great handfuls of it out and ate it with the greatest relish.

It was morning time when they descended, and they fed upon the fragrant earth all day till the sun set and the shades of evening began to surround them, then the eldest of the spirits looked around upon his fellows, and said:

“Brethren, oie! it is time that we ascended to our own country,” and as the rest assented they stood up to return, but alas! they could not rise, they had eaten so much earth it had made them too heavy to soar, and from that day to the day they died none of them ever found their way back to the beautiful country of the Hsangs, but had to spend all their lives upon this earth of ours.

Thus we see that it is earthly desires that keep us from the spirit country. We see, or we hear, we smell or desire some earthly thing. We get our desires, but they keep us pinned down to the earth. We cannot go to the spirit country because of them.

When the spirits discovered that they could not return to the Hsang country they agreed that they would marry each other and take up their abode upon this earth of ours. But here arose a difficulty; there were five male hsangs but only four females! There was chance of a great quarrel, but the strongest of them, his name was Hsin Kyan, thought within himself:

“I am stronger than any of my brothers and could easily defeat them and marry whom I will, but what merit would there be in that? I will ask them whether they would be willing to make me king and each of them give me of their daughters when they are old enough, then in time I shall have wives and power as well.” Thus we see it is the man who is willing to control his desires and wait who becomes great.

Hsin Kyan’s brethren were very glad to make the agreement and thus it was that he became the ruler of them all. When the daughters of the others were old enough, they brought them to the king, and from that day it has been the custom for men to offer their daughters to the king.

Now it happened that the universal lord, Sa Kyah, who rules over all spirits and men looked earthward and saw the new kingdom that was established; he became jealous and determined to kill Hsin Kyan and take his kingdom away from him. But Hsin Kyan was very subtle and cunning, so he tattooed himself with charms of such great strength that even the mighty lord Sa Kyah could not kill him. For many years they fought. Great mountains were thrown by each combatant at the other, but Hsin Kyan could not defeat the lord Sa Kyah, neither could the lord Sa Kyah kill Hsin Kyan.

Our great ancestor Hsin Kyan had seven daughters, whose names to this day are remembered among us as they have been given to the different days of the week, from Nang Ta Nang Nooie, the eldest, after whom we call the first day of the week Wan Ta Nang Nooie, to Nang Hsa Ne, the youngest, and when the mighty lord Sa Kyah found that he could not kill their father, he spoke to these daughters and told them he was searching for one whom he would make his chief queen, and that if one of them would kill his enemy, their father, and bring to him his head, he would choose that one to be his queen and make her joint ruler of the universe; with him she should govern everything created.

But the charms tattooed upon Hsin Kyan were very potent. Water would not drown him; fire would not burn him; rope would not strangle him; and he was invulnerable against thrust of spear and stroke of sword, and although all seven of his daughters tried to kill him yet they were not able to do so and six of them gave up the attempt in despair.

One day, however, the youngest, she whom we worship on the seventh day of the week and because she was the smallest call it Wan Hsa Nae, was walking in the jungle, and as she was passing under a tree she saw a bird sitting upon its topmost branch. Now this girl knew how clever birds are, and so she said to it:

“Brother Bird, oie! can you tell me how I can kill my father?”

Now although this daughter was the youngest, yet she was more lovely than all her sisters, and the bird was so pleased with her that he said:

“Nang Hsa Nae, you are so beautiful that I will tell you the secret of your father’s charm. Water cannot drown him, fire cannot burn him, neither can sword or spear wound him, but there is one way in which he may be killed. Take you, seven strands of a spider’s web and twist them into a cord, then with a piece of white bamboo make a bow; with this you will be able to cut off the head of your father and take it to the mighty lord Sa Kyah, and oh!” continued the clever bird, “when you are his queen, do not forget the good turn I have done you, and the debt of gratitude you owe me therefor.”

Nang Hsa Nae was full of joy when she learned the secret of her father’s charm and she promised the little bird that when she became queen of the universe she would grant him any desire that he craved.

That night when everybody else was asleep, Nang Hsa Nae crept to her father’s side and with the bow made of the seven twisted strands of a spider’s web killed him and cut off his head.

With great joy she carried it to the universal lord. He was very glad to find that his enemy was at last dead, but although he had given his word to her, yet he would not marry Nang Hsa Nae, for, said he, she has killed her father although I could not conquer him. Were I to marry her, who will go surety for her that she will not do the same to me? So the wicked daughter did not gain her ambitious end after all.

Not only that, however, but she and her sisters received a punishment, one they are even now suffering, and will continue till the world ends. It is this:

When they found that the lord Sa Kyah would not marry their youngest sister or even accept their father’s head, they said among themselves:

“What shall we do with the head of our father? Where shall we bury it? Should we place it in the earth the whole world would catch on fire; should we throw it into the sea, all the seven oceans would immediately boil; what shall we do?”

In their distress they went to the mighty lord Sa Kyah and in humble tones begged his lordship to give them advice so that they would be freed from the terrible trouble to which their wickedness had brought them. He looked at them and said:

“This is what you must do. You,” pointing to the youngest, “must carry your father’s head in your arms all this year, and when the year is finished you can give it to the sister who is next older than yourself. She will carry it for a year and thus one of you will ever after bear it.”

And so it is. We know when the year ends because then come the Wan Kyap or washing days, when the princess who has carried her father’s head for a year gives it to her elder sister and washes the bloodstains from her clothes.

From these spirits all the inhabitants of the world are descended, and so we see the saying of our philosophers is true, “We have all descended from spirits.” 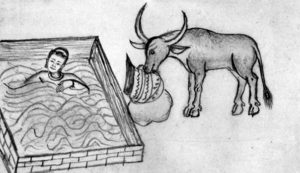 THE SPARROW’S WONDERFUL BROOD (SHAN FOLK LORE STORIES, 1902) BY WILLIAM C. GRIGGS
MANY, many years ago, at the beginning of the world, a little…
Cresta Posts Box by CP