THE MEET (REYNARD THE FOX, 1920) by JOHN MASEFIELD 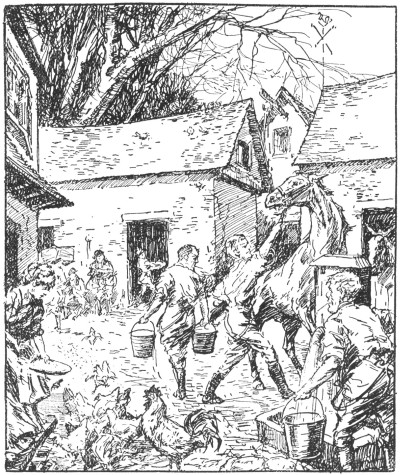 The meet was at “The Cock and PyeBy Charles and Martha Enderby,”
The grey, three-hundred-year-old inn
Long since the haunt of BenjaminThe highwayman, who rode the bay.
The tavern fronts the coaching way,
The mail changed horses there of old.
It has a strip of grassy mouldIn front of it, a broad green strip.
A trough, where horses’ muzzles dip,
Stands opposite the tavern front,
And there that morning came the hunt,
To fill that quiet width of road
As full of men as FramilodeIs full of sea when tide is in.
The stables were alive with din
From dawn until the time of meeting.
A pad-groom gave a cloth a beating,
Knocking the dust out with a stake.
Two men cleaned stalls with fork and rake,
And one went whistling to the pump,
The handle whined, ker-lump, ker-lump,
The water splashed into the pail,
And, as he went, it left a trail,
Lipped over on the yard’s bricked paving.
Two grooms (sent on before) were shaving
There in the yard, at glasses propped
On jutting bricks; they scraped and stropped,
And felt their chins and leaned and peered,
A woodland day was what they feared
(As second horsemen), shaving there.
Then, in the stalls where hunters were,
Straw rustled as the horses shifted,
The hayseeds ticked and haystraws drifted
From racks as horses tugged their feed.
Slow gulping sounds of steady greed
Came from each stall, and sometimes stampings,
Whinnies (at well-known steps) and rampings
To see the horse in the next stall. The stables were alive with din
From dawn until the time of meeting.
Outside, the spangled cock did call
To scattering grain that Martha flung.
And many a time a mop was wrung
By Susan ere the floor was clean.
The harness room, that busy scene,
Clinked and chinked from ostlers brightening
Rings and bits with dips of whitening,
Rubbing fox-flecks out of stirrups,
Dumbing buckles of their chirrups
By the touch of oily feathers.
Some, with stag’s bones rubbed at leathers,
Brushed at saddle-flaps or hove
Saddle linings to the stove.
Blue smoke from strong tobacco drifted
Out of the yard, the passers snifft it,
Mixed with the strong ammonia flavour
Of horses’ stables and the savour
Of saddle-paste and polish spirit which put the gleam on flap and tirrit.
The grooms in shirts with rolled-up sleeves,
Belted by girths of coloured weaves,
Groomed the clipped hunters in their stalls.
One said, “My dad cured saddle galls,
He called it Doctor Barton’s cure;
Hog’s lard and borax, laid on pure.”
And others said, “Ge’ back, my son,” “
Stand over, girl; now, girl, ha’ done.”
“Now, boy, no snapping; gently.Crikes,
He gives a rare pinch when he likes.”
“Drawn blood? I thought he looked a biter.”
“I give ’em all sweet spit of nitre
For that, myself: that sometimes cures.”
“Now, Beauty, mind them feet of yours.”
They groomed, and sissed with hissing notes
To keep the dust out of their throats. There came again and yet again
The feed-box lid, the swish of grain,
Or Joe’s boots stamping in the loft,
The hay-fork’s stab and then the soft
Hay’s scratching slither down the shoot.
Then with a thud some horse’s foot stamped
And the gulping munch again
Resumed its lippings at the grain.
The road outside the inn was quiet
Save for the poor, mad, restless pyat
Hopping his hanging wicker-cage.
No calmative of sleep or sage
Will cure the fever to be free.
He shook the wicker ceaselessly
Now up, now down, but never out
On wind-waves, being blown about,
Looking for dead things good to eat.
His cage was strewn with scattered wheat.
At ten o’clock, the Doctor’s lad
Brought up his master’s hunting pad and put him in a stall, and leaned
Against the stall, and sissed, and cleaned
The port and cannons of his curb
.He chewed a sprig of smelling herb.
He sometimes stopped, and spat, and chid
The silly things his master did.

Recommended
THE TWO JEEBI (The Indian Fairy Book, 1869) BY CORNELIUS MATHEWS
There lived a hunter in the North, who had a…
Cresta Posts Box by CP