How the Brazilian Beetles Got Their Gorgeous Coats (Fairy Tales from Brazil, 1917) by Elsie Spicer Eells 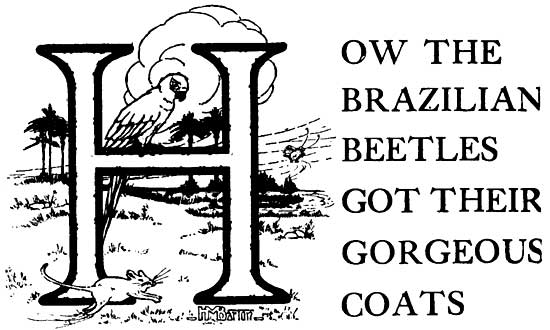 In Brazil the beetles have such beautifully coloured, hard-shelled coats upon their backs that they are often set in pins and necklaces like precious stones. Once upon a time, years and years ago, they had ordinary plain brown coats. This is how it happened that the Brazilian beetle earned a new coat.

One day a little brown beetle was crawling along a wall when a big grey rat ran out of a hole in the wall and looked down scornfully at the little beetle. “O ho!” he said to the beetle, “how slowly you crawl along. You’ll never get anywhere in the world. Just look at me and see how fast I can run.”

The big grey rat ran to the end of the wall, wheeled around, and came back to the place where the little beetle was slowly crawling along at only a tiny distance from where the rat had left her.

“Don’t you wish that you could run like that?” said the big grey rat to the little brown beetle.

“You are surely a fast runner,” replied the little brown beetle politely. Her mother had taught her always to be polite and had often said to her that a really polite beetle never boasts about her own accomplishments. The little brown beetle never boasted a single boast about the things she could do. She just went on slowly crawling along the wall.

A bright green and gold parrot in the mango tree over the wall had heard the conversation. “How would you like to race with the beetle?” he asked the big grey rat. “I live next door to the tailor bird,” he added, “and just to make the race exciting I’ll offer a bright coloured coat as a prize to the one who wins the race. You may choose for it any colour you like and I’ll have it made to order.”

“I’d like a yellow coat with stripes like the tiger’s,” said the big grey rat, looking over his shoulder at his gaunt grey sides as if he were already admiring his new coat.

The big grey rat laughed long and loud until his gaunt grey sides were shaking. “Why, you talk just as if you thought you had a chance to win the race,” he said, when he could speak.

The big grey rat ran as fast as he could. Then he thought how very tired he was getting. “What’s the use of hurrying?” he said to himself. “The little brown beetle can not possibly win. If I were racing with somebody who could really run it would be very different.” Then he started to run more slowly but every time his heart beat it said, “Hurry up! Hurry up!” The big grey rat decided that it was best to obey the little voice in his heart so he hurried just as fast as he could.

When he reached the royal palm tree at the top of the cliff he could hardly believe his eyes. He thought he must be having a bad dream. There was the little brown beetle sitting quietly beside the bright green and gold parrot. The big grey rat had never been so surprised in all his life. “How did you ever manage to run fast enough to get here so soon?” he asked the little brown beetle as soon as he could catch his breath.

The little brown beetle drew out the tiny wings from her sides. “Nobody said anything about having to run to win the race,” she replied, “so I flew instead.”

“I did not know that you could fly,” said the big grey rat in a subdued little voice.

“After this,” said the bright green and gold parrot, “never judge any one by his looks alone. You never can tell how often or where you may find concealed wings. You have lost the prize.”

Until this day, even in Brazil where the flowers and birds and beasts and insects have such gorgeous colouring, the rat wears a plain dull grey coat.

Then the parrot turned to the little brown beetle who was waiting quietly at his side. “What colour do you want your new coat to be?” he asked.

From that day to this the Brazilian beetle has worn a coat of green with golden lights upon it.

For years and years the Brazilian beetles were all very proud to wear green and gold coats like that of the beetle who raced with the rat.

Then, once upon a time, it happened that there was a little beetle who grew discontented with her coat of green and gold. She looked up at the blue sky and out at the blue sea and wished that she had a blue coat instead. She talked about it so much that finally her mother took her to the parrot who lived next to the tailor bird.

“You may change your coat for a blue one,” said the parrot, “but if you change you’ll have to give up something.”

“Oh, I’ll gladly give up anything if only I may have a blue coat instead of a green and gold one,” said the discontented little beetle.

When she received her new coat she thought it was very beautiful. It was a lovely shade of blue and it had silvery white lights upon it like the light of the stars. When she put it on, however, she discovered that it was not hard like the green and gold one. From that day to this the blue beetles’ coats have not been hard and firm. That is the reason why the jewellers have difficulty in using them in pins and necklaces like other beetles.

From the moment that the little beetle put on her new blue coat she never grew again. From that day to this the blue beetles have been much smaller than the green and gold ones.

When the Brazilians made their flag they took for it a square of green the colour of the green beetle’s coat. Within this square they placed a diamond of gold like the golden lights which play upon the green beetle’s back. Then, within the diamond, they drew a circle to represent the round earth and they coloured it blue like the coat of the blue beetle. Upon the blue circle they placed stars of silvery white like the silvery white lights on the back of the blue beetle. About the blue circle of the earth which they thus pictured they drew a band of white, and upon this band they wrote the motto of their country, “Ordem e Progresso, order and progress.”