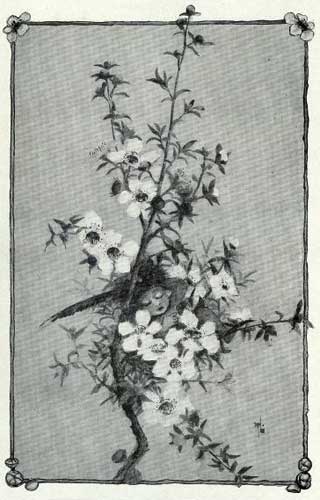 One of the Piccaninnies had a horrid adventure one day. He had heard a tui that morning singing in the Bush, and had made up his mind to speak to it, because he was sulking with the other Piccaninnies.

You know they say a tui can be made to talk, but it’s hard to get near enough to one to find out, but perhaps if you did get close and surprised it, it would be so mad at you that it would answer back.

The Piccaninny followed his tui up and up, but it flitted from tree top to tree top, and he could hear it tolling a bell and cracking a whip, and chuckling at him, and finally it flew away, and that was the last of it.

The Piccaninny, tired out, climbed up into a tea tree bush, and swung himself gently to-and-fro until he rocked himself to sleep among the pretty little starry flowers, a thing he should never have done unless a Piccaninny Boy Scout had been posted near by in case of danger. He was so drowsy, that he never heard a voice saying:

“Oh! look here, George, this is a lovely spray!” nor felt the spray on which he was sleeping torn from its mother-bush, and carried away. It was taken into a big room in a big house, and there on a big table it was placed in a silver vase.

It was then the Piccaninny woke up because the bough had ceased to sway gently up and down. At first he was very surprised, and then, poking his little brown head out, he was horribly frightened. Instead of the green leafy arch above him, he saw a flat white thing, and all around him were enormous strange objects. Craning out still farther he over-balanced himself and fell thud! upon a hard, polished flat plain. He tried to scramble to his feet, but the ground under him was so slippery that he could only crawl gingerly on all fours and flounder about on it.

“Oh, look at that horrid brown insect. It must have come from the tea tree. Fetch the brush and dustpan.”

And someone else cried excitedly:

But a third someone said quite calmly:

Then a huge bristly thing fell upon him, and smothered and gasping he felt himself swept along, and then flying through the air. Again he fell with a thud upon something hard, but it was only the hardness of the good brown earth, and the tall green grass closed protectingly over him.

You may be sure he lost no time in scuttling back to the bush, and he didn’t hunt tuis again for many a long day. 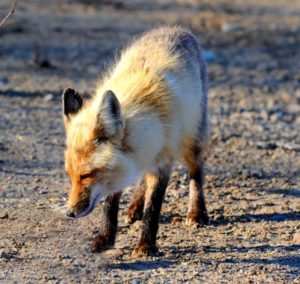 The Fox Who Had Lost His Tail (Aesop’s fables) by Aesop
A FOX caught in a trap escaped, but in so…
Cresta Posts Box by CP