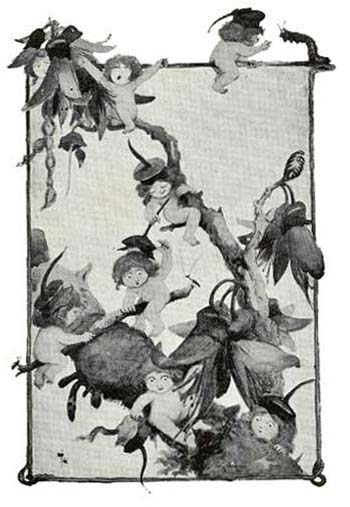 The Bush Babies come out of the kowhai flowers. They are the prettiest little things—fair as lilies with golden ringlets, and little golden peaked caps, bent over like a horn upon their heads. I don’t think they wear anything else much, just an odd little fluff of green here and there, like stray feathers that have stuck to them.

“They haven’t a stitch, But they never take cold.”

The Piccaninnies love to play with them; indeed, they’re favourites with everyone, and it’s the prettiest sight in the world at early morning, to see each Bush Baby crawling out of its cradle flower on its little tummy, yawning or smiling or stretching, or blinking at the light with round sleepy eyes.

But you would never get up early enough to see that.

They tell a story in the Bush about a Bush Baby and a Piccaninny—and laugh about it to this day. The Piccaninny told the Bush Baby that he would find some honey for her. Now the Bush Babies love honey better than anything else in the world, so she put her hand in his sweetly and off they set.

They came to the edge of the swamp where the tall branching flax flowers grow (the flax is not in flower when the kowhai is, but I can’t spoil my story for that), and every flax flower was alive with birds, dipping, and sipping the honey, so the two little creatures wandered off again.

The Piccaninny led the Bush Baby to several other flowers, but at every one some bird or insect would edge them away, crying out:

“We got here first!”

“The Bush Lawyer, the most spiteful plant in the bush.”

At last the Bush Baby began to cry. They are very young and tender things, these Babies, and this one had been caught and scratched by the Bush Lawyer, the most spiteful plant in the Bush, and had nearly fallen into a creek, and the peak of its cap was dangling into its eye, and it was a long way from home.

To comfort it the Piccaninny put his little brown arms right round it and loved it, and they both sat down on a fallen tree to rest while he wiped its eyes with a soft green leaf—they didn’t know about pocket handkerchiefs yet.

Oh! The next moment out of a hole in the tree flew a swarm of angry bees, with humming wings and large fierce eyes and tails curved down to strike.

The Bush Baby was so astonished that she fell off the log, and there she lay face down on the green moss, so still that the bees took her for a fallen kowhai blossom and droned away from her.

But the Piccaninny ran for his life, with all the bees after him, and when the noise of their angry buzzing had died away, the Bush Baby got up and had a rare feast of honey, and went back home very sticky and blissful and contented.

As for the Piccaninny, who had escaped the bees, by lying down and pretending to be a Tea Tree Jack (they call that camouflage now), he only sniffed when they told him about it, and said:

“Pooh! I knew that honey was there all the time. I said I’d find her some and I did!”

When the tree of gold
Turns a tree of green,
The dear Bush Babies
Are no more seen.
To fields of gold
They have gaily run,
And are lost in the light
Of the golden sun;
Or caught in the mist
Of gold that lies
Like a net of dreams
On Day’s sleepy eyes.
But behold! next year
They are here! They are here!
They come trooping back
Down the wander-track,
Like rays of light
In the forest old,
And the green tree turns
To a tree of gold. 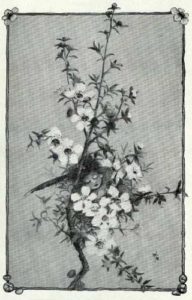 TEA TREE (PICCANINNIES BY ISABEL MAUD PEACOCKE)
One of the Piccaninnies had a horrid adventure one day.…
Cresta Posts Box by CP