THE WOMAN, THE MAN AND THE NĀT (Told on the Pagoda TALES OF BURMAH, 1895) by Mimosa 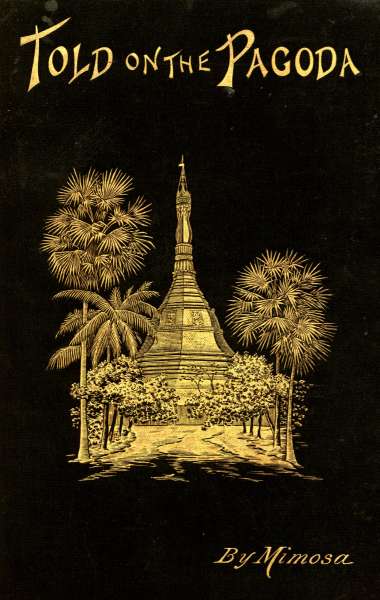 IN every large tree there lives a Nāt, and it is a custom very strictly adhered to that before any tree can be touched the permission of the spirit must be asked and obtained.

Now a woodman cut down a tree one day without giving the Nāt who resided in it the slightest warning, a proceeding which infuriated the spirit exceedingly, and he determined to be revenged; so, taking upon himself without delay the exact form and likeness of the woodman, he gathered up a bundle of sticks and went in advance of him to his home, in the brief warm gloom that precedes the fall of night. When he reached the hut, that was as bare as a hermit’s cell, thatched with dunni leaves, and situated in one of the deepest recesses of the dense sylvan growth, he placed the wood outside and went within. An oil lamp stood on the wooden ledge of the entrance and threw a faint light on all around. The wife of the woodcutter was busy boiling the evening rice, a baby slept in its box-like cradle slung from a beam in the roof; a little boy of five or six sat cutting plaintain leaves.

The Nāt greeted the woman; she answered him cheerily. Then he squatted down on a piece of matting.

The rice being ready, the wife put it out on the plaintain leaves, giving one to her supposed husband, one to the boy, and keeping the other for herself. They ate together, and when they had finished drank some water from the chatty standing near. Then they sat and smoked, and talked together of the many little trifling events which went to make up their world. The woman cleared away the remains of their meal, and took out some betel chews and commenced to roll them, while the child slept behind the purdah. About half an hour passed away thus, when lo! on the stillness broke the voice of the woodman calling to his wife that he was coming, saying that he had been delayed.

The woman heard in bewildered astonishment, then turned to the Nāt, who apparently had not heeded the call, and asked him if she dreamt.

Then rising, she peered out into the gloom, just faintly relieved by the rays of a young moon, and beheld the form of a woodcutter coming between the trees, identically the same in figure and face as her husband who was there beside her. The new-comer called her by her name again, bidding her prepare something for him to eat, as he was tired and hungry.

He threw the wood down that he carried, and entered, but staggered back on seeing his counterpart squatting, quite at home, on the ground. The woman looked from one to the other, and knew not what to do or think.

There was silence for a few moments. Then he who had come last asked, when he had sufficiently recovered himself to speak—

“Who is this man who bears so strange a likeness to me?”

“I am the husband of this woman,” answered the Nāt calmly, not even removing his green-leaf cigar from between his lips.

“That cannot be,” exclaimed the other indignantly, “because I am he.”

The Nāt shook his head, and went on smoking.

The woodcutter, mad with anger and astonishment, turned excitedly to his wife, and cried—

The woman looked from one to the other, and examined each carefully, and was more puzzled than ever.

The woman wrung her hands as she answered—

“I don’t know if you are my husband; you are both so much alike that I cannot tell.” Then she broke down and wept.

And the Nāt hearing, smiled where he sat in the shadows.

After awhile the woman dried her tears, smoothed back her heavy masses of black hair, and asked what was to be done.

They neither of them answered. Then she said, “Let us go and seek Manoo, and abide by what he says.”

Manoo was a very learned judge, who had been appointed, while still quite young, Chief Justice of the King’s Court, and was renowned for the wise and prudent judgments that he invariably pronounced.

The Nāt objected to the proposition. Secretly he feared that Manoo might perhaps guess his identity; but the woodman assented eagerly to his wife’s idea, and between them they overcame the other’s dislike, and the three started without delay, going through the forest between the silvered line of palm-trees; the fire-flies danced before them, and the bats flitted by like ghosts in the warm darkness. All that night and part of the next they travelled, until they reached the Court of Manoo, which was a large white building, supported by chunamed pillars, and with many carved doors.

The judge himself, magnificently arrayed, sat upon a raised couch, that was covered with scarlet satin, richly embroidered, and with a heavy fringe of gold and jewels edging it.

The woman, the Nāt, and the woodman, leaving their shoes at the gates, entered, and, seating themselves at a respectful distance on separate pieces of matting, told their tale.

The judge listened in silence to the end; then he asked the woman if her husband had any particular mark on him by which she could distinguish him.

Her face lightened as she answered that he had a black mark on his back and a red scar on his knee. Then Manoo had both men examined carefully, but found that each had the same marks in the same places.

The woman became more hopelessly bewildered than ever, and knew not what to make of the extraordinary circumstance; while the judge found himself in a position of considerable difficulty.

He saw that he would have to consider the matter carefully for some time; so he bade them go, and return on the following day at the same hour.

Then he went home to his house, which was a gift from his royal master, and was situated on a rocky promontory, with the sea rolling up almost to the entrance. Seating himself alone in his study—the windows of which looked out over the water to where a rich sunset glowed westward, edging the waves with freckled lustre, and throwing purple, amber, and azure lights over the white-crested waves—he became absorbed in deep thought, as a result of which he came to a solution of the matter. On the next day, therefore, when his three strange applicants presented themselves before him, he had a wooden wheel brought into the room and placed in the middle of the floor, saying at the same time—

“The man who shall go through the hole in that wheel will be a wonderful man, and will be recognised as the real husband of this woman.”

On hearing which the woodman protested, saying that it was impossible for any human being to go through so small a space, that it was only large enough to admit of an arm; and he grumbled greatly, saying that the test was very unfair.

But Manoo bade him be patient and silent yet awhile. Then he turned to the Nāt, and asked him what he thought. The Nāt, who was laughing inwardly, at once replied that he could perform the task that the woodcutter deemed impossible. The judge smiled a little complacently as he bade him do it.

The Nāt immediately went to and fro through the hole with the greatest ease, the woman looking on in speechless amaze.

“I suspected yesterday that you were no mortal, but a visitor from the Nāt country, and now I am, of course, convinced of it.”

The Nāt hung his head, and the judge proceeded, saying—

“Why have you come from your own world, taking upon yourself this form and shape, thereby causing so much pain and unhappiness to two innocent people?”

The Nāt, seeing that he could no longer carry on his course of deception, answered—

“In the season of the sun, and in that of the rain, for a greater time than I can count, I have lived in a tree in the forest, where this woodman comes every day. I troubled no one, and I was content till two days ago, when he felled my home to the ground with neither warning given to or permission asked of me. When other woodcutters have come, they have and do always crave permission of the Nāt residing in the tree to take from it even one branch. Therefore you must see that I have had just cause to be angry.”

Manoo then said that the woodman had certainly been wrong in the way he had acted. Then, turning to the woman, he directed her and her husband to hang up a dried cocoa-nut on the best side of their hut for the Nāt to make his home in—an order which they promised to speedily obey.

The Nāt said that he was satisfied with that arrangement.

Then the three, thanking the judge, withdrew and went homewards.

From that time forth all Burmese people hung, and still hang, dried cocoa-nut in their houses for the spirits to dwell in. 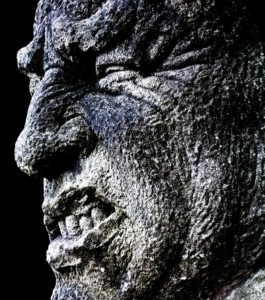 The Man and His Two Sweethearts (Aesop’s fables) by Aesop
A MIDDLE-AGED MAN, whose hair had begun to turn gray,…
Cresta Posts Box by CP