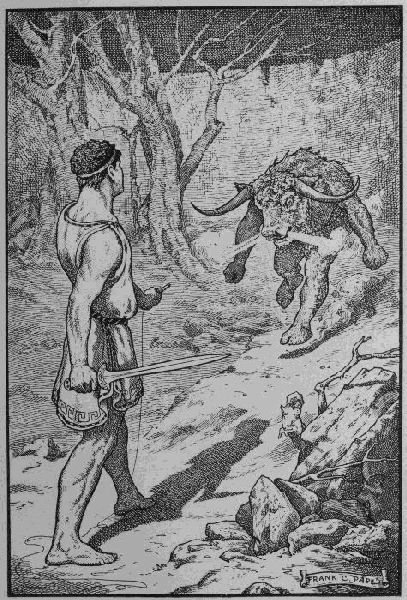 And now Prince Theseus was taken into great favor by his royal father. The old king was never weary of having him sit beside him on his throne (which was quite wide enough for two), and of hearing him tell about his dear mother, and his childhood, and his many boyish efforts to lift the ponderous stone. Theseus, however, was much too brave and active a young man to be willing to spend all his time in relating things which had already happened. His ambition was to perform other and more heroic deeds, which should be better worth telling in prose and verse. Nor had he been long in Athens before he caught and chained a terrible mad bull, and made a public show of him, greatly to the wonder and admiration of good King Ægeus and his subjects. But pretty soon he undertook an affair that made all his foregone adventures seem like mere boy’s play. The occasion of it was as follows:

One morning, when Prince Theseus awoke, he fancied that he must have had a very sorrowful dream, and that it was still running in his mind, even now that his eyes were open. For it appeared as if the air was full of a melancholy wail; and when he listened more attentively, he could hear sobs, and groans, and screams of woe, mingled with deep, quiet sighs, which came from the king’s palace, and from the streets, and from the temples, and from every habitation in the city. And all these mournful noises, issuing out of thousands of separate hearts, united themselves into the one great sound of affliction which had startled Theseus from slumber. He put on his clothes as quickly as he could (not forgetting his sandals and gold-hilted sword), and hastening to the king, inquired what it all meant. THESEUS GOES TO SLAY THE MINOTAUR

“Alas! my son,” quoth King Ægeus, heaving a long sigh, “here is a very lamentable matter in hand! This is the woefullest anniversary in the whole year. It is the day when we annually draw lots to see which of the youths and maidens of Athens shall go to be devoured by the horrible Minotaur!”

“The Minotaur!” exclaimed Prince Theseus; and, like a brave young prince as he was, he put his hand to the hilt of his sword. “What kind of a monster may that be? Is it not possible, at the risk of one’s life, to slay him?”

But King Ægeus shook his venerable head, and to convince Theseus that it was quite a hopeless case, he gave him an explanation of the whole affair. It seems that in the island of Crete there lived a certain dreadful monster, called a Minotaur, which was shaped partly like a man and partly like a bull, and was altogether such a hideous sort of a creature that it is really disagreeable to think of him. If he were suffered to exist at all, it should have been on some desert island, or in the duskiness of some deep cavern, where nobody would ever be tormented by his abominable aspect. But King Minos, who reigned over Crete, laid out a vast deal of money in building a habitation for the Minotaur, and took great care of his health and comfort, merely for mischief’s sake. A few years before this time there had been a war between the city of Athens and the island of Crete, in which the Athenians were beaten, and compelled to beg for peace. No peace could they obtain, however, except on condition that they should send seven young men and seven maidens, every year, to be devoured by the pet monster of the cruel King Minos. For three years past this grievous calamity had been borne. And the sobs, and groans, and shrieks with which the city was now filled were caused by the people’s woe, because the fatal day had come again when the fourteen victims were to be chosen by lot; and the old people feared lest their sons or daughters might be taken, and the youths and damsels dreaded lest they themselves might be destined to glut the ravenous maw of that detestable man-brute.

But when Theseus heard the story, he straightened himself up, so that he seemed taller than ever before; and as for his face, it was indignant, despiteful, bold, tender, and compassionate, all in one look.

“Let the people of Athens this year draw lots for only six young men, instead of seven,” said he. “I will myself be the seventh; and let the Minotaur devour me if he can!”

“Oh, my dear son!” cried King Ægeus, “why should you expose yourself to this horrible fate? You are a royal prince, and have a right to hold yourself above the destinies of common men.”

“It is because I am a prince, your son, and the rightful heir to your kingdom, that I freely take upon me the calamity of your subjects,” answered Theseus. “And you, my father, being king over this people, and answerable to Heaven for their welfare, are bound to sacrifice what is dearest to you, rather than that the son or daughter of the poorest citizen should come to any harm.”

The old king shed tears, and besought Theseus not to leave him desolate in his old age, more especially as he had but just begun to know the happiness of possessing a good and valiant son. Theseus, however, felt that he was in the right, and therefore would not give up his resolution. But he assured his father that he did not intend to be eaten up unresistingly, like a sheep, and that, if the Minotaur devoured him, it should not be without a battle for his dinner. And finally, since he could not help it, King Ægeus consented to let him go. So a vessel was got ready, and rigged with black sails; and Theseus, with six other young men and seven tender and beautiful damsels, came down to the harbor to embark. A sorrowful multitude accompanied them to the shore. There was the poor old king, too, leaning on his son’s arm, and looking as if his single heart held all the grief of Athens.

Just as Prince Theseus was going on board his father bethought himself of one last word to say.

“My beloved son,” said he, grasping the prince’s hand, “you observe that the sails of this vessel are black, as indeed they ought to be, since it goes upon a voyage of sorrow and despair. Now, being weighed down with infirmities, I know not whether I can survive till the vessel shall return. But as long as I do live, I shall creep daily to the top of yonder cliff, to watch if there be a sail upon the sea. And, dearest Theseus, if by some happy chance you should escape the jaws of the Minotaur, then tear down those dismal sails, and hoist others that shall be bright as the sunshine. Beholding them on the horizon, myself and all the people will know that you are coming back victorious, and will welcome you with such a festal uproar as Athens never heard before.”

Theseus promised that he would do so. Then, going on board, the mariners trimmed the vessel’s black sails to the wind, which blew faintly off the shore, being pretty much made up of the sighs that everybody kept pouring forth on this melancholy occasion. But by and by, when they got fairly out to sea, there came a stiff breeze from the north-west, and drove them along as merrily over the white-capped waves as if they had been going on the most delightful errand imaginable. And though it was a sad business enough, I rather question whether fourteen young people, without any old persons to keep them in order, could continue to spend the whole time of the voyage in being miserable. There had been some few dances upon the undulating deck, I suspect, and some hearty bursts of laughter, and other such unseasonable merriment among the victims, before the high, blue mountains of Crete began to show themselves among the far-off clouds. That sight, to be sure, made them all very grave again.

No sooner had they entered the harbor than a party of the guards of King Minos came down to the waterside and took charge of the fourteen young men and damsels. Surrounded by these armed warriors, Prince Theseus and his companions were led to the king’s palace and ushered into his presence. Now Minos was a stern and pitiless king. He bent his shaggy brows upon the poor Athenian victims. Any other mortal, beholding their fresh and tender beauty and their innocent looks, would have felt himself sitting on thorns until he had made every soul of them happy by bidding them go free as the summer wind. But this immitigable Minos cared only to examine whether they were plump enough to satisfy the Minotaur’s appetite. For my part, I wish he himself had been the only victim; and the monster would have found him a pretty tough one.

One after another, King Minos called these pale, frightened youths and sobbing maidens to his footstool, gave them each a poke in the ribs with his scepter (to try whether they were in good flesh or no), and dismissed them with a nod to his guards. But when his eyes rested on Theseus, the king looked at him more attentively, because his face was calm and grave.

“Young man,” asked he, with his stern voice, “are you not appalled at the certainty of being devoured by this terrible Minotaur?”

“I have offered my life in a good cause,” answered Theseus, “and therefore I give it freely and gladly. But thou, King Minos, art thou not thyself appalled, who, year after year, hast perpetrated this dreadful wrong, by giving seven innocent youths and as many maidens to be devoured by a monster? Dost thou not tremble, wicked king, to turn thine eyes inward on thine own heart? Sitting there on thy golden throne and in thy robes of majesty, I tell thee to thy face, King Minos, thou art a more hideous monster than the Minotaur himself!”

“Aha! do you think me so?” cried the king, laughing in his cruel way. “To-morrow, at breakfast time, you shall have an opportunity of judging which is the greater monster, the Minotaur or the king! Take them away, guards; and let this free-spoken youth be the Minotaur’s first morsel!”

THE SHE-WOLF (Sixty Folk-Tales from Exclusively Slavonic Sources) Translated by Albert Henry Wratislaw
There was an enchanted mill, so that no one could…
Cresta Posts Box by CP