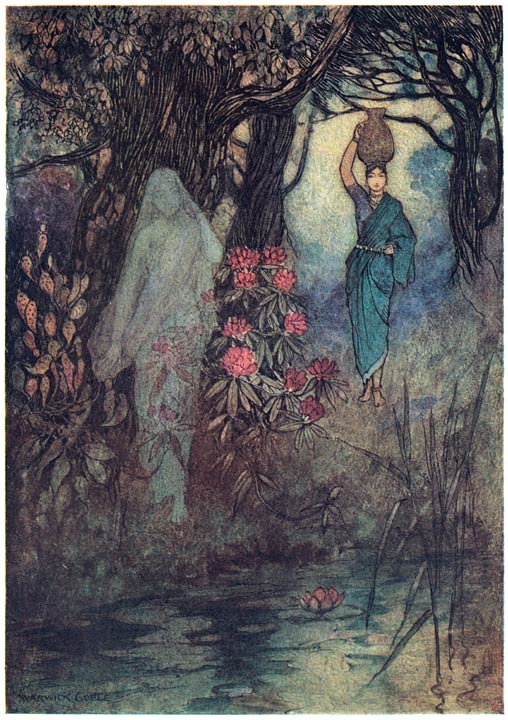 Once on a time there lived a Brahman who had married a wife, and who lived in the same house with his mother. Near his house was a tank, on the embankment of which stood a tree, on the boughs of which lived a ghost of the kind called Sankchinni. One night the Brahman’s wife had occasion to go to the tank, and as she went she brushed by a Sankchinni who stood near; on which the she-ghost got very angry with the woman, seized her by the throat, climbed into her tree, and thrust her into a hole in the trunk. There the woman lay almost dead with fear. The ghost put on the clothes of the woman and went into the house of the Brahman. Neither the Brahman nor his mother had any inkling of the change. The Brahman thought his wife returned from the tank, and the mother thought that it was her daughter-in-law. Next morning the mother-in-law discovered some change in her daughter-in-law. Her daughter-in-law, she knew, was constitutionally weak and languid, and took a long time to do the work of the house. But she had apparently become quite a different person. All of a sudden she had become very active. She now did the work of the house in an incredibly short time. Suspecting nothing, the old woman said nothing either to her son or to her daughter-in-law; on the contrary, she inly rejoiced that her daughter-in-law had turned over a new leaf. But her surprise became every day greater and greater. The cooking of the household was done in much less time than before. When the mother-in-law wanted the daughter-in-law to bring anything from the next room, it was brought in much less time than was required in walking from one room to the other. The ghost, instead of going inside the next room, would stretch a long arm—for ghosts can lengthen or shorten any limb of their bodies—from the door and get the thing. One day the old woman observed the ghost doing this. She ordered her to bring a vessel from some distance, and the ghost unconsciously stretched her hand to several yards’ distance, and brought it in a trice. The old woman was struck with wonder at the sight. She said nothing to her, but spoke to her son. Both mother and son began to watch the ghost more narrowly. One day the old woman knew that there was no fire in the house, and she knew also that her daughter-in-law had not gone out of doors to get it; and yet, strange to say, the hearth in the kitchen-room was quite in a blaze. She went in, and, to her infinite surprise, found that her daughter-in-law was not using any fuel for cooking, but had thrust into the oven her foot, which was blazing brightly. The old mother told her son what she had seen, and they both concluded that the young woman in the house was not his real wife but a she-ghost. The son witnessed those very acts of the ghost which his mother had seen. An Ojha2 was therefore sent for. The exorcist came, and wanted in the first instance to ascertain whether the woman was a real woman or a ghost. For this purpose he lighted a piece of turmeric and set it below the nose of the supposed woman. Now this was an infallible test, as no ghost, whether male or female, can put up with the smell of burnt turmeric. The moment the lighted turmeric was taken near her, she screamed aloud and ran away from the room. It was now plain that she was either a ghost or a woman possessed by a ghost. The woman was caught hold of by main force and asked who she was. At first she refused to make any disclosures, on which the Ojha took up his slippers and began belabouring her with them. Then the ghost said with a strong nasal accent—for all ghosts speak through the nose—that she was a Sankchinni, that she lived on a tree by the side of the tank, that she had seized the young Brahmani and put her in the hollow of her tree because one night she had touched her, and that if any person went to the hole the woman would be found. The woman was brought from the tree almost dead; the ghost was again shoebeaten, after which process, on her declaring solemnly that she would not again do any harm to the Brahman and his family, she was released from the spell of the Ojha and sent away; and the wife of the Brahman recovered slowly. After which the Brahman and his wife lived many years happily together and begat many sons and daughters. “The Brahman’s wife had occasion to go to the tank, and as she went she brushed by a Sankchinni” 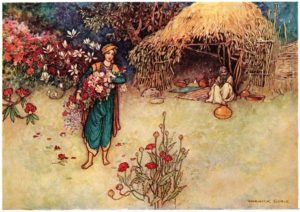 The Man who wished to be Perfect (Folk-Tales of Bengal, 1912) by Rev. Lal Behari Day
Once on a time a religious mendicant came to a…
Cresta Posts Box by CP