Lion and Jackal, it is said, were one day lying in wait for Eland. Lion shot (with a bow) and missed, but Jackal hit and sang out, “Hah! hah!”

Lion said, “No, you did not shoot anything. It was I who hit.”

Then they went home in order to return when the eland was dead, and cut it up. Jackal, however, turned back, unknown to Lion, hit his nose so that the blood ran on the spoor of the eland, and followed their track thus, in order to cheat Lion. When he had gone some distance, he returned by another way to the dead eland, and creeping into its carcass, cut out all the fat.

Meanwhile Lion followed the blood-stained spoor of Jackal, thinking that it was eland blood, and only when he had gone some distance did he find out that he had been deceived. He then returned on Jackal’s spoor, and reached the dead eland, where, finding Jackal in its carcass, he seized him by his tail and drew him out with a swing.

Lion upbraided Jackal with these words: “Why do you cheat me?”

Jackal answered: “No, my father, I do not cheat you; you may know it, I think. I prepared this fat for you, father.”

Lion said: “Then take the fat and carry it to your mother” (the lioness); and he gave him the lungs to take to his own wife and children.

When Jackal arrived, he did not give the fat to Lion’s wife, but to his own wife and children; he gave, however, the lungs to Lion’s wife, and he pelted Lion’s little children with the lungs, saying:

He said to Lioness, “I go to help my father” (the lion); but he went far away with his wife and children. 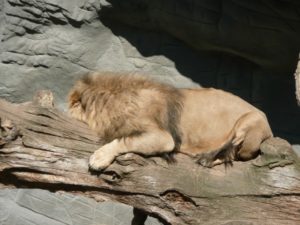 THE LION AND JACKAL (South-African Folk-Tales, 1910) by James A. Honey
Lion had now caught a large eland which lay dead…
Cresta Posts Box by CP