STORY OF LION AND LITTLE JACKAL (South-African Folk-Tales, 1910) by James A. Honey

The first animal killed was a large eland. Lion was very glad, and said to Little Jackal: “I will continue hunting while you go to my house and call my children to carry the meat home.”

Little Jackal replied: “Yes, I agree to that.”

Lion went away to hunt. When he had gone, Little Jackal went to his own house and called his own children to carry away the meat. He said: “Lion takes me for a fool if he thinks I will call his children while my own are dying with hunger.”

So Little Jackal’s children carried the meat to their home on the top of a high rock, where the only way to get to their house was by means of a rope.

Lion caught nothing more, and after a time he went home and asked his wife where the meat was. She told him there was no meat. He said: “Did not Little Jackal bring a message to my children to carry meat?”

His wife replied: “No, he was not here. We are still dying with hunger.”

Lion then went to Little Jackal’s house, but he could not get up the rock to it. So he sat down by the water, waiting. After a time Little Jackal went to get some water. He was close to the water when he saw Lion. He at once ran away, and Lion ran after him. He ran into a hole under a tree, but Lion caught his tail before he got far in. He said to him: “That is not my tail you have hold of; it is a root of the tree. If you do not believe me, take a stone and strike it, and see if any blood comes.”

Lion let go the tail, and went for a stone to prove what it was. While he was gone for the stone, Little Jackal went far into the hole. When Lion returned he could not be found. Lion lay down by the hole and waited. After a long time Little Jackal wanted to come out. He went to the entrance and looked round, but he could not see Lion. To make sure, he said: “Ho, I see you, my master, although you are in hiding.”

Lion did not move from the place where he lay concealed. Then Little Jackal went out, and Lion pursued him, but he got away.

Lion watched for him, and one day, when Little Jackal was out hunting, he came upon him in a place where he could not escape. Lion was just about to spring upon him, when Little Jackal said softly: “Be still, do you not see that bushbuck on the other side of the rock? I am glad you have come to help me. Just remain here while I run round and drive him toward you.”

Lion did so, and Little Jackal made his escape.

At another time there was a meeting of the animals, and Lion was the chief at the meeting. Little Jackal wanted to attend, but there was a law made that no one should be present unless he had horns. So Little Jackal took wax out of a nest of bees, and made horns for himself with it. He fastened the horns on his head, and went to the meeting. Lion did not know him on account of the horns. But he sat near the fire and went to sleep, when the horns melted.

Lion looked at him and saw who it was. He immediately tried to catch him, but Little Jackal was quick in springing away. He ran under an overhanging rock and sang out: “Help! help! this rock is falling upon me!”

Lion went for a pole to prop up the rock that he might get at Little Jackal. While he was away, Little Jackal escaped.

After that they became companions again, and went hunting another time. They killed an ox. Lion said: “I will watch it while you carry the pieces away.”

Lion gave him the breast, and said: “Take this to my wife.”

Little Jackal took it to his own wife. When he returned, Lion gave him a shin, and said: “Take this to your wife.”

Little Jackal took the shin to Lion’s house. Lion’s wife said: “I cannot take this because it should not come here.”

Little Jackal thereupon struck Lion’s wife in the face, and went back to the place where the ox was killed. Lion gave him a large piece of meat and said: “Take this to my wife.”

Little Jackal took it to his own wife. This continued till the ox was finished. Then they both went home. When Lion arrived at his house he found there was weeping in his family.

Lion replied: “I have merely come to see you. I wish you to let down the rope.”

Little Jackal let down a rope made of mouse skins, and when Lion climbed a little way up, the rope broke, and he fell and was hurt. He then went home. 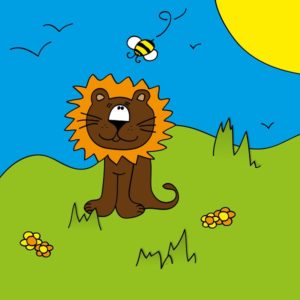 THE HUNT OF LION AND JACKAL (South-African Folk-Tales, 1910) by James A. Honey
Lion and Jackal, it is said, were one day lying…
Cresta Posts Box by CP