THE LION AND JACKAL (South-African Folk-Tales, 1910) by James A. Honey 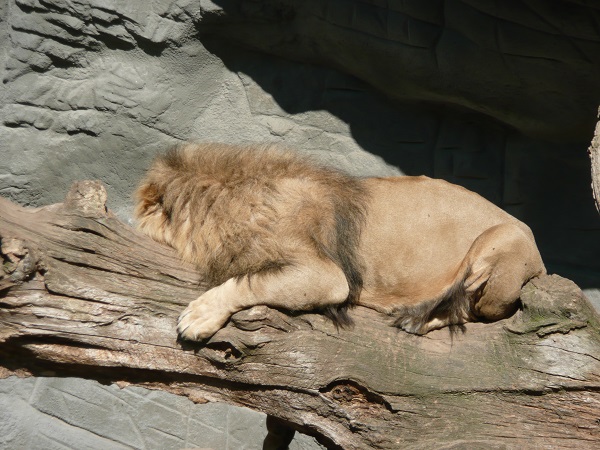 Lion had now caught a large eland which lay dead on the top of a high bank. Lion was thirsty and wanted to go and drink water. “Jackal, look after my eland, I am going to get a drink. Don’t you eat any.”

Lion went to the river and Jackal quietly removed a stone on which Lion had to step to reach the bank on his return. After that Jackal and his wife ate heartily of the eland. Lion returned, but could not scale the bank. “Jackal, help me,” he shouted.

“Yes, Uncle Lion, I will let down a rope and then you can climb up.”

His wife gave him an old rotten rope. Jackal and his wife first ate ravenously of the meat, then gradually let the rope down. Lion seized it and struggled up. When he neared the brink Jackal gave the rope a jerk. It broke and down Lion began to roll—rolled the whole way down, and finally lay at the foot near the river.

Jackal began to beat a dry hide that lay there as he howled, cried, and shouted: “Wife, why did you give me such a bad rope that caused Uncle Lion to fall?”

Lion heard the row and roared, “Jackal, stop beating your wife. I will hurt you if you don’t cease. Help me to climb up.”

“Uncle Lion, I will give you a rope.” Whispering again to his wife, “Give me one of the old, thin hide ropes,” and shouting aloud again, “Give me a strong, buffalo rope, wife, that will not break again with Lion.”

Jackal gave out the rope, and when Lion had nearly reached the top, he cut the rope through. Snap! and Lion began to roll to the bottom. Jackal again beat on the hide and shouted, “Wife, why did you give me such a rotten rope? Didn’t I tell you to give me a strong one?” Lion roared, “Jackal, stop beating your wife at once. Help me instantly or you will be sorry.”

“Wife,” Jackal said aloud, “give me now the strongest rope you have,” and aside to her, “Give me the worst rope of the lot.”

Jackal again let down a rope, but just as Lion reached the top, Jackal gave a strong tug and broke the rope. Poor old Lion rolled down the side of the hill and lay there roaring from pain. He had been fatally hurt.

Jackal inquired, “Uncle Lion, have you hurt yourself? Have you much pain? Wait a while, I am coming directly to help you.” Jackal and his wife slowly walked away. THE JACKAL AND THE WOLF (South-African Folk-Tales, 1910) by James A. Honey
Once on a time Jackal, who lived on the borders…
Cresta Posts Box by CP