Once upon a time two merchants lived in a certain town just on the verge of a stream. One of them was a Russian, the other a Tartar; both were rich. But the Russian got so utterly ruined by some business or other that he hadn’t a single bit of property left. Everything he had was confiscated or stolen. The Russian merchant had nothing to turn to—he was left as poor as a rat. So he went to his friend the Tartar, and besought him to lend him some money.

“Get me a surety,” says the Tartar.

“But whom can I get for you, seeing that I haven’t a soul belonging to me? Stay, though! there’s a surety for you, the life-giving cross on the church!”

“Very good, my friend!” says the Tartar. “I’ll trust your cross. Your faith or ours, it’s all one to me.”

And he gave the Russian merchant fifty thousand roubles. The Russian took the money, bade the Tartar farewell, and went back to trade in divers places.

By the end of two years he had gained a hundred and fifty thousand roubles by the fifty thousand he had borrowed. Now he happened to be sailing one day along the Danube, going with wares from one place to another, when all of a sudden a storm arose, and was on the point of sinking the ship he was in. Then the merchant remembered how he had borrowed money, and given the life-giving cross as a surety, but had not paid his debt. That was doubtless the cause of the storm arising! No sooner had he said this to himself than the storm began to subside. The merchant took a barrel, counted out fifty thousand roubles, wrote the Tartar a note, placed it, together with the money, in the barrel, and then flung the barrel into the water, saying to himself: “As I gave the cross as my surety to the Tartar, the money will be certain to reach him.”

The barrel straightway sank to the bottom; everyone supposed the money was lost. But what happened? In the Tartar’s house there lived a Russian kitchen-maid. One day she happened to go to the river for water, and when she got there she saw a barrel floating along. So she went a little way into the water and began trying to get hold of it. But it wasn’t to be done! When she made at the barrel, it retreated from her: when she turned from the barrel to the shore, it floated after her. She went on trying and trying for some time, then she went home and told her master all that had happened. At first he wouldn’t believe her, but at last he determined to go to the river and see for himself what sort of barrel it was that was floating there. When he got there—sure enough there was the barrel floating, and not far from the shore. The Tartar took off his clothes and went into the water; before he had gone any distance the barrel came floating up to him of its own accord. He laid hold of it, carried it home, opened it, and looked inside. There he saw a quantity of money, and on top of the money a note. He took out the note and read it, and this is what was said in it:—

“Dear friend! I return to you the fifty thousand roubles for which, when I borrowed them from you, I gave the life-giving cross as a surety.”

The Tartar read these words and was astounded at the power of the life-giving cross. He counted the money over to see whether the full sum was really there. It was there exactly.

Meanwhile, the Russian merchant, after trading some five years, made a tolerable fortune. Well, he returned to his old home, and, thinking that his barrel had been lost, he considered it his first duty to settle with the Tartar. So he went to his house and offered him the money he had borrowed. Then the Tartar told him all that had happened and how he had found the barrel in the river, with the money and the note inside it. Then he showed him the note, saying:

“Is that really your hand?”

“It certainly is,” replied the other.

Every one was astounded at this wondrous manifestation, and the Tartar said:

“Then I’ve no more money to receive from you, brother; take that back again.”

The Russian merchant had a service performed as a thank-offering to God, and next day the Tartar was baptized with all his household. The Russian merchant was his godfather, and the kitchen-maid his godmother. After that they both lived long and happily, survived to a great age, and then died peacefully.

There is one marked feature in the Russian peasant’s character to which the Skazkas frequently refer—his passion for drink. To him strong liquor is a friend, a comforter, a solace amid the ills of life. Intoxication is not so much an evil to be dreaded or remembered with shame, as a joy to be fondly anticipated, or classed with the happy memories of the past. By him drunkenness is regarded, like sleep, as the friend of woe—and a friend whose services can be even more readily commanded. On certain occasions he almost believes that to get drunk is a duty he owes either to the Church, or to the memory of the Dead; at times without the slightest apparent cause, he is seized by a sudden and irresistible craving for ardent spirits, and he commences a drinking-bout which lasts—with intervals of coma—for days, or even weeks, after which he resumes his everyday life and his usual sobriety as calmly as if no interruption had taken place. All these ideas and habits of his find expression in his popular tales, giving rise to incidents which are often singularly out of keeping with the rest of the narrative in which they occur. In one of the many variants, for instance, of a widespread and well known story—that of the three princesses who are rescued from captivity by a hero from whom they are afterwards carried away, and who refuse to get married until certain clothes or shoes or other things impossible for ordinary workmen to make are supplied to them—an unfortunate shoemaker is told that if he does not next day produce the necessary shoes (of perfect fit, although no measure has been taken, and all set thick with precious stones) he shall be hanged. Away he goes at once to a traktir, or tavern, and sets to work to drown his grief in drink. After awhile he begins to totter. “Now then,” he says, “I’ll take home a bicker of spirits with me, and go to bed. And to-morrow morning, as soon as they come to fetch me to be hanged, I’ll toss off half the bickerful. They may hang me then without my knowing anything about it.”

In the story of the “Purchased Wife,” the Princess Anastasia, the Beautiful, enables the youth Ivan, who ransoms her, to win a large sum of money in the following manner. Having worked a piece of embroidery, she tells him to take it to market. “But if any one purchases it,” says she, “don’t take any money from him, but ask him to give you liquor enough to make you drunk.” Ivan obeys, and this is the result. He drank till he was intoxicated, and when he left the kabak (or pot-house) he tumbled into a muddy pool. A crowd collected and folks looked at him and said scoffingly, “Oh, the fair youth! now’d be the time for him to go to church to get married!”

“Fair or foul!” says he, “if I bid her, Anastasia the Beautiful will kiss the crown of my head.”

“Don’t go bragging like that!” says a rich merchant—“why she wouldn’t even so much as look at you,” and offers to stake all that he is worth on the truth of his assertion. Ivan accepts the wager. The Princess appears, takes him by the hand, kisses him on the crown of his head, wipes the dirt off him, and leads him home, still inebriated but no longer impecunious.

Sometimes even greater people than the peasants get drunk. The story of “Semilétka”—a variant of the well known tale of how a woman’s wit enables her to guess all riddles, to detect all deceits, and to conquer all difficulties—relates how the heroine was chosen by a Voyvode as his wife, with the stipulation that if she meddled in the affairs of his Voyvodeship she was to be sent back to her father, but allowed to take with her whatever thing belonging to her she prized most. The marriage takes place, but one day the well known case comes before him for decision, of the foal of the borrowed mare—does it belong to the owner of the mare, or to the borrower in whose possession it was at the time of foaling? The Voyvode adjudges it to the borrower, and this is how the story ends:—

“Semilétka heard of this and could not restrain herself, but said that he had decided unfairly. The Voyvode waxed wroth, and demanded a divorce. After dinner Semilétka was obliged to go back to her father’s house. But during the dinner she made the Voyvode drink till he was intoxicated. He drank his fill and went to sleep. While he was sleeping she had him placed in a carriage, and then she drove away with him to her father’s. When they had arrived there the Voyvode awoke and said—

“‘I brought you,’ said Semilétka; ‘there was an agreement between us that I might take away with me whatever I prized most. And so I have taken you!’

“The Voyvode marvelled at her wisdom, and made peace with her. He and she then returned home and went on living prosperously.”

But although drunkenness is very tenderly treated in the Skazkas, as well as in the folk-songs, it forms the subject of many a moral lesson, couched in terms of the utmost severity, in the stikhi (or poems of a religious character, sung by the blind beggars and other wandering minstrels who sing in front of churches), and also in the “Legends,” which are tales of a semi-religious (or rather demi-semi-religious) nature. 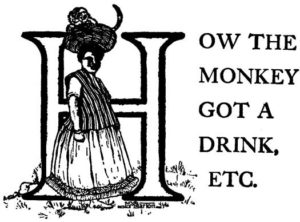 How the Monkey Got a Drink When He Was Thirsty (Fairy Tales from Brazil, 1917) by Elsie Spicer Eells
Once upon a time the monkey made the tiger very…
Cresta Posts Box by CP