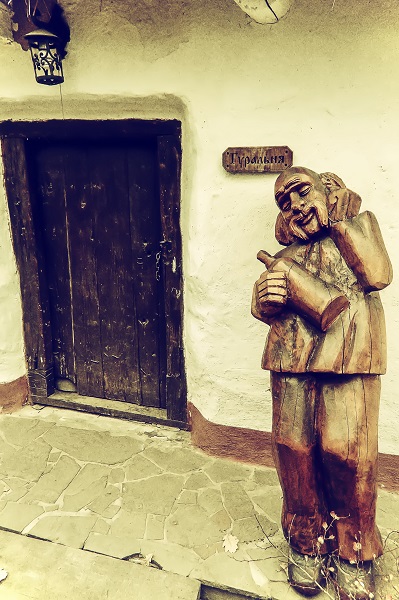 Once there was an old man who was such an awful drunkard as passes all description. Well, one day he went to a kabak, intoxicated himself with liquor, and then went staggering home blind drunk. Now his way happened to lie across a river. When he came to the river, he didn’t stop long to consider, but kicked off his boots, hung them round his neck, and walked into the water. Scarcely had he got half-way across when he tripped over a stone, tumbled into the water—and there was an end of him.

Now, he left a son called Petrusha. When Peter saw that his father had disappeared and left no trace behind, he took the matter greatly to heart for a time, he wept for awhile, he had a service performed for the repose of his father’s soul, and he began to act as head of the family. One Sunday he went to church to pray to God. As he passed along the road a woman was pounding away in front of him. She walked and walked, stumbled over a stone, and began swearing at it, saying, “What devil shoved you under my feet?”

“Good day, aunt! whither away?”

“But isn’t this sinful conduct of yours? You’re going to church, to pray to God, and yet you think about the Evil One; your foot stumbles and you throw the fault on the Devil!”

Well, he went to church and then returned home. He walked and walked, and suddenly, goodness knows whence, there appeared before him a fine-looking man, who saluted him and said:

“Thanks, Petrusha, for your good word!”

“Who are you, and why do you thank me?” asks Petrusha.

“I am the Devil. I thank you because, when that woman stumbled, and scolded me without a cause, you said a good word for me.” Then he began to entreat him, saying, “Come and pay me a visit, Petrusha. How I will reward you to be sure! With silver and with gold, with everything will I endow you.”

Having told him all about the road he was to take, the Devil straightway disappeared, and Petrusha returned home.

Next day Petrusha set off on his visit to the Devil. He walked and walked, for three whole days did he walk, and then he reached a great forest, dark and dense—impossible even to see the sky from within it! And in that forest there stood a rich palace. Well, he entered the palace, and a fair maiden caught sight of him. She had been stolen from a certain village by the evil spirit. And when she caught sight of him she cried:

“Whatever have you come here for, good youth? here devils abide, they will tear you to pieces.”

Petrusha told her how and why he had made his appearance in that palace.

“Well now, mind this,” says the fair maiden; “the Devil will begin giving you silver and gold. Don’t take any of it, but ask him to give you the very wretched horse which the evil spirits use for fetching wood and water. That horse is your father. When he came out of the kabak drunk, and fell into the water, the devils immediately seized him and made him their hack, and now they use him for fetching wood and water.”

Presently there appeared the gallant who had invited Petrusha, and began to regale him with all kinds of meat and drink. And when the time came for Petrusha to be going homewards, “Come,” said the Devil, “I will provide you with money and with a capital horse, so that you will speedily get home.”

“I don’t want anything,” replied Petrusha. “Only, if you wish to make me a present, give me that sorry jade which you use for carrying wood and water.”

“What good will that be to you? If you ride it home quickly, I expect it will die!”

So the Devil gave him that sorry jade. Petrusha took it by the bridle and led it away. As soon as he reached the gates there appeared the fair maiden, and asked:

“Have you got the horse?”

“Well then, good youth, when you get nigh to your village, take off your cross, trace a circle three times about this horse, and hang the cross round its neck.”

Petrusha took leave of her and went his way. When he came nigh to his village he did everything exactly as the maiden had instructed him. He took off his copper cross, traced a circle three times about the horse, and hung the cross round its neck. And immediately the horse was no longer there, but in its place there stood before Petrusha his own father. The son looked upon the father, burst into tears, and led him to his cottage; and for three days the old man remained without speaking, unable to make use of his tongue. And after that they lived happily and in all prosperity. The old man entirely gave up drinking, and to his very last day never took so much as a single drop of spirits. The Russian peasant is by no means deficient in humor, a fact of which the Skazkas offer abundant evidence. But it is not easy to find stories which can be quoted at full length as illustrations of that humor. The jokes which form the themes of the Russian facetious tales are for the most part common to all Europe. And a similar assertion may be made with regard to the stories of most lands. An unfamiliar joke is but rarely to be discovered in the lower strata of fiction. He who has read the folk-tales of one country only, is apt to attribute to its inhabitants a comic originality to which they can lay no claim. And so a Russian who knows the stories of his own land, but has not studied those of other countries, is very liable to credit the Skazkas with the undivided possession of a number of “merry jests” in which they can claim but a very small share—jests which in reality form the stock-in-trade of rustic wags among the vineyards of France or Germany, or on the hills of Greece, or beside the fiords of Norway, or along the coasts of Brittany or Argyleshire—which for centuries have set beards wagging in Cairo and Ispahan, and in the cool of the evening hour have cheered the heart of the villager weary with his day’s toil under the burning sun of India.

It is only when the joke hinges upon something which is peculiar to a people that it is likely to be found among that people only. But most of the Russian jests turn upon pivots which are familiar to all the world, and have for their themes such common-place topics as the incorrigible folly of man, the inflexible obstinacy of woman. And in their treatments of these subjects they offer very few novel features. It is strange how far a story of this kind may travel, and yet how little alteration it may undergo. Take, for instance, the skits against women which are so universally popular. Far away in outlying districts of Russia we find the same time-honored quips which have so long figured in collections of English facetiæ. There is the good old story, for instance, of the dispute between a husband and wife as to whether a certain rope has been cut with a knife or with scissors, resulting in the murder of the scissors-upholding wife, who is pitched into the river by her knife-advocating husband; but not before she has, in her very death agony, testified to her belief in the scissors hypothesis by a movement of her fingers above the surface of the stream. In a Russian form of the story, told in the government of Astrakhan, the quarrel is about the husband’s beard. He says he has shaved it, his wife declares he has only cut it off. He flings her into a deep pool, and calls to her to say “shaved.” Utterance is impossible to her, but “she lifts one hand above the water and by means of two fingers makes signs to show that it was cut.” The story has even settled into a proverb. Of a contradictory woman the Russian peasants affirm that, “If you say ‘shaved’ she’ll say ‘cut.’”

In the same way another story shows us in Russian garb our old friend the widower who, when looking for his drowned wife—a woman of a very antagonistic disposition—went up the river instead of down, saying to his astonished companions, “She always did everything contrary-wise, so now, no doubt, she’s gone against the stream.” A common story again is that of the husband who, having confided a secret to his wife which he justly fears she will reveal, throws discredit on her evidence about things in general by making her believe various absurd stories which she hastens to repeat. The final paragraph of one of the variants of this time-honored jest is quaint, concluding as it does, by way of sting, with a highly popular Russian saw. The wife has gone to the seigneur of the village and accused her husband of having found a treasure and kept it for his own use. The charge is true, but the wife is induced to talk such nonsense, and the husband complains so bitterly of her, that “the seigneur pitied the moujik for being so unfortunate, so he set him at liberty; and he had him divorced from his wife and married to another, a young and good-looking one. Then the moujik immediately dug up his treasure and began living in the best manner possible.” Sure enough the proverb doesn’t say without reason: “Women have long hair and short wits.”

There is another story of this class which is worthy of being mentioned, as it illustrates a custom in which the Russians differ from some other peoples.

A certain man had married a wife who was so capricious that there was no living with her. After trying all sorts of devices her dejected husband at last asked her how she had been brought up, and learnt that she had received an education almost entirely German and French, with scarcely any Russian in it; she had not even been wrapped in swaddling-clothes when a baby, nor swung in a liulka. Thereupon her husband determined to remedy the short-comings of her early education, and “whenever she showed herself capricious, or took to squalling, he immediately had her swaddled and placed in a liulka, and began swinging her to and fro.” By the end of a half year she became “quite silky”—all her caprices had been swung out of her.

But instead of giving mere extracts from any more of the numerous stories to which the fruitful subject of woman’s caprice has given rise, we will quote a couple of such tales at length. The first is the Russian variant of a story which has a long family tree, with ramifications extending over a great part of the world. Dr. Benfey has devoted to it no less than sixteen pages of his introduction to the Panchatantra, tracing it from its original Indian home, and its subsequent abode in Persia, into almost every European land.

Recommended
The Cross-Surety (Russian Fairy Tales) by W. R. S. RALSTON
Once upon a time two merchants lived in a certain…
Cresta Posts Box by CP