One day one of those tiresome picnic parties came again to the bush, and after a great deal of stupid and rather terrifying noise, during which every Piccaninny and Bush Baby and all the other bush folk lay hidden away in utter silence, the people all went away again, and the Wee Folk were free to come out of their hiding places and turn over curiously the few things the party had left.

There was an empty meat tin which flashed so brightly that the Piccaninnies took it for a helmet, and each in turn tried to wear it; but it was so big that it simply hid them altogether, so very regretfully they had to throw it away. Then there were a few crusts of bread which quite by accident one of the boys discovered to be good to eat. They finished every crumb of the bread and enjoyed it, but on the whole agreed that fern root tasted nicer. There was an empty bottle that nobody dared go near, for they thought it was some kind of gun, and a baby’s woollen bootee, which the Piccaninnies found most useful as an enormous bag to be filled with berries. But most mysterious, and therefore most interesting, though a little frightening, was a large heap of grey smoking ashes where the picnic fire had been.

The Piccaninnies circled round and round this queer grey pile wondering what on earth it could be. One boy venturing a little nearer than the others trod on a live cinder, for the fire was not as dead as it ought to have been, and jumped back howling and hopping round and round on one foot, holding the other.

When they crowded round him asking what had happened he cried in fear:

“The Red Enemy bit me. He lives under that grey mound, and I saw his red eye flash as I went near. That is his breath you see rising up through the trees.”

The Piccaninnies looked frightened and backed away from the grey mound, but all the rest of that evening they came again and again to stare upon the Red Enemy, and each time they came his red eyes seemed to flash brighter, his thick white breath to grow denser as it wound up through the trees, and he seemed to be purring and growling to himself.

“All the rest of the evening they came again and again to stare upon the Red Enemy.”

When the Piccaninnies went to bed that night they were very uneasy and could not sleep well. The sound of the Red Enemy’s breathing seemed to fill the bush with a low roaring, and his breath stole in and out of the trees like a reddish mist; the air was very hot and dry. One of the Piccaninnies, a brave little fellow, said that he would go and see what their strange new enemy was doing, and sliding down his sleeping-tree he set off.

He had not gone far before the heat and the stifling air drove him hack, and rushing back to his friends he cried:

“Run for your lives! Quick! Quick! The Great Red Enemy is coming. He is roaring with anger and tearing the trees down as he comes. None of us can hope to escape him, for he has a million bright red eyes which he sends flying through the bush in all directions to find us, and his breath is so thick that we will be lost in it if we don’t run now. Run! Run!”

The Piccaninnies did not wait to be told twice. Without waiting to pack up they slid down the trees and started to run through the dark bush, and soon there were hundreds of little bush creatures all joining in the race for life.

On, on they ran in fear and excitement, hearing the angry roaring of the Great Red Enemy behind them, feeling his hot breath scorching them as it writhed and twisted through the trees in reddish-black billows. Some of his millions of angry, red searching eyes flew or drifted past them, but they never stopped for a moment. And now they had left the trees behind them and were running over clear ground, and before long they reached the edge of the swamp, lying dark and cool before them.

In their haste and fear they all plunged in headlong and found the water so fresh and cool and delightful after their heat and hurry, that they burrowed deeper into it, only leaving their little black heads sticking out.

All that night they lay and watched the Great Red Enemy in his wrath worrying and tearing their poor trees to pieces, and all next day and the next it lasted, and then nothing was left of their beautiful bush but a few black, ugly stumps and a great grey waste of ashes.

And from the ashes rose the smoking dense breath of the Red Enemy, and every now and then he flashed an angry red eye. The Piccaninnies who had lived in that part of the bush could never again return to the cool green shades of the forest, never slide down a fern leaf, or swing on the branches, or pick puriri berries, or pelt the morepork in the daytime.

What could they do? Where could they go? Poor, poor little Piccaninnies!

Well, this is what they did. Having no home to go to, and finding the water very delightful they decided to make their home in it. At first they would only stay timidly near the edges where the water was not deep, but by-and-by through living entirely in the water they grew webbed-toes (you try it!) and became as much at home in the swamp as any other water-creature. Some of them even grew elegant little tails (believe me or not, as you choose!) and they became known in the swamp as the Teenywiggles, and some day you may hear something more of the doings of the Teenywiggles. 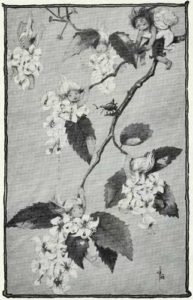 HOHERIA BLOSSOM (PICCANINNIES BY ISABEL MAUD PEACOCKE)
Do you know the Lovely Ladies of the Bush? They…
Cresta Posts Box by CP