THE ZEBRA STALLION (South-African Folk-Tales, 1910) by James A. Honey

The Baboons, it is said, used to disturb the Zebra Mares in drinking. But one of the Mares became the mother of a foal. The others then helped her to suckle (the young stallion), that he might soon grow up.

When he was grown up and they were in want of water, he brought them to the water. The Baboons, seeing this, came, as they formerly were used to do, into their way, and kept them from the water.

While the Mares stood thus, the Stallion stepped forward, and spoke to one of the Baboons, “Thou gum-eater’s child!”

The Baboon said to the Stallion, “Please open thy mouth, that I may see what thou livest on.” The Stallion opened his mouth, and it was milky.

Then the Stallion said to the Baboon, “Please[123] open thy mouth also, that I may see.” The Baboon did so, and there was some gum in it. But the Baboon quickly licked some milk off the Stallion’s tongue. The Stallion on this became angry, took the Baboon by his shoulders, and pressed him upon a hot, flat rock. Since that day the Baboon has a bald place on his back.

The Baboon said, lamenting, “I, my mother’s child, I, the gum-eater, am outdone by this milk-eater!” 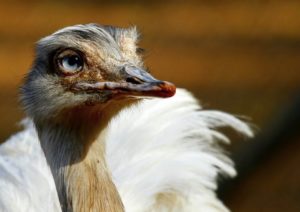 TORTOISES HUNTING OSTRICHES (South-African Folk-Tales, 1910) by James A. Honey
One day, it is said, the Tortoises held a council…
Cresta Posts Box by CP