How the Monkey Escaped Being Eaten (Fairy Tales from Brazil, 1917) by Elsie Spicer Eells 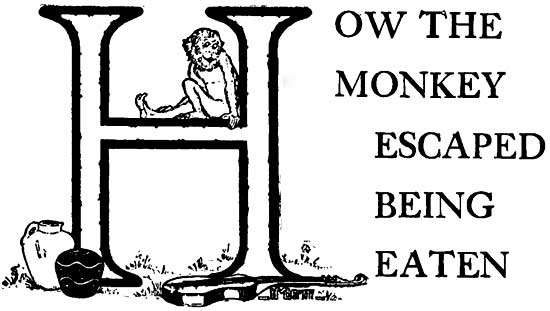 Once upon a time, ages and ages ago, people ate fruits and nuts. Then there came a time when the fruits and nuts became scarce. People had to eat meat. So they began killing the various beasts to see which ones were the best to eat. They skinned them and cut them in pieces and cooked them over the fire. Some of the beasts were good to eat and others were not good at all.

The ox was found to be very good, and so was the sheep, and the armadillo. Then one day a man thought that he would try to eat the monkey.

After that every time the man heard the monkey play the guitar he would come near and try to catch him. The monkey grew afraid of the man, so afraid that he gave up playing his guitar at all. For a long, long time he did not play upon it. One day he felt that he just must have some music. He hid in a hole in the ground and there he played upon his guitar. He did not think that the man would hear him, but the man had very sharp ears. When he got through playing he started to come out of the hole in the ground. There was the man waiting for him! He crawled quickly back,—so far back that the man could not catch him. The monkey waited and waited for the man to go away, but the man did not go away.

After a while the man became thirsty and went to get a drink. He left his little boy in his place to watch for the monkey. After the man had gone away the monkey called out to the little boy, “O, little boy, O, little boy, don’t you wish that you could see the monkey dance?”

The little boy replied that he wished he could.

“Just put your eyes down to the door of my little cave, and I’ll let you see the monkey dance, little boy,” said the monkey.

The children replied that they wished they could.

“This box is so small that there is not room enough for me to dance here,” said the monkey. “Just let me out and I’ll show you how well I can dance.”

The children thought that it would not be polite to tell the monkey what the pot of water was waiting for, so they let the monkey fill the pot as he liked. He put into it some little dry sticks and an empty cocoanut shell. Then he said, “O, children, O, children, I cannot dance any more. It is so hot here in this room.”

The children begged him to dance some more.

“If you will open the door a little bit so that I can have more air to breathe I’ll show you a new dance,” said the monkey.

The children opened the door. The monkey danced over to the door and out of the door away to the tree top. That was the last they ever saw of him. He moved to another part of the country after that experience.

When the man came home with fuel for the fire the children did not dare to tell him that the monkey had escaped. They let him think that the sticks and the cocoanut shell in the pot was the monkey. He built a big roaring fire under the pot and soon it was boiling merrily. After the pot had boiled a while he called the children to come to supper with him. The children let him taste first. He fished a hard stick out of the pot and bit into it. “This is not the monkey’s leg. It is just a dry stick,” he said, as he made a wry face. Then he fished the empty cocoanut shell out of the pot. “That is not the monkey’s head,” he said as he tasted it, “That is just an empty cocoanut shell.” He couldn’t find a single trace of the monkey in that monkey stew. He never wished to make a monkey stew again. 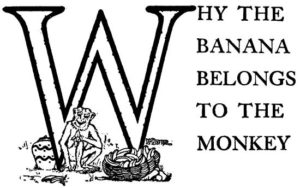 Why the Bananas Belong to the Monkey (Fairy Tales from Brazil, 1917) by Elsie Spicer Eells
Perhaps you do not know it, but the monkeys think…
Cresta Posts Box by CP