THE CLERGYMAN (REYNARD THE FOX, 1920) by JOHN MASEFIELD 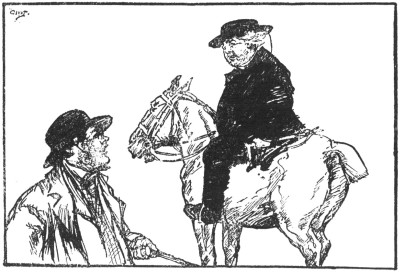 A pommle cob came trotting up,
Round-bellied like a drinking-cup,
Bearing on back a pommle man
Round-bellied like a drinking-can.
The clergyman from Condicote.
His face was scarlet from his trot,
His white hair bobbed about his head
As halos do round clergy dead.
He asked Tom Copp, “How long to wait?”
His loose mouth opened like a gate
To pass the wagons of his speech,
He had a mighty voice to preach,
Though indolent in other matters,
He let his children go in tatters.
His daughter Madge on foot, flushed-cheekt,
In broken hat and boots that leakt,
With bits of hay all over her,
Her plain face grinning at the stir
(A broad pale face, snub-nosed, with speckles
Of sandy eyebrows sprinkt with freckles)
Came after him and stood apart
Beside the darling of her heart,
Miss Hattie Dyce from Baydon Dean;
A big young fair one, chiselled clean,
Brow, chin, and nose, with great blue eyes,
All innocence and sweet surprise,
And golden hair piled coil on coil
Too beautiful for time to spoil.
They talked in undertones together
Not of the hunting, nor the weather.
Old Steven, from Scratch Steven Place
(A white beard and a rosy face),
Came next on his stringhalty grey,
“I’ve come to see the hounds away,”
He said, “And ride a field or two.
We old have better things to do
Than breaking all our necks for fun.”
He shone on people like the sun,
And on himself for shining so.
Three men came riding in a row:
—John Pyn, a bull-man, quick to strike,
Gross and blunt-headed like a shrike
Yet sweet-voiced as a piping flute;
Tom See, the trainer, from the Toot,
Red, with an angry, puzzled face
And mouth twitched upward out of place,
Sucking cheap grapes and spitting seeds;
And Stone, of Bartle’s Cattle Feeds,
A man whose bulk of flesh and bone
Made people call him Twenty Stone.
He was the man who stood a pull
At Tencombe with the Jersey bull And brought the bull back to his stall.
Some children ranged the tavern-wall,
Sucking their thumbs and staring hard;
Some grooms brought horses from the yard.
Jane Selbie said to Ellen Tranter,
“A lot on ’em come doggin’, ant her?”
“A lot on ’em,” said Ellen, “look
There’m Mister Gaunt of Water’s Hook.
They say he” … (whispered). “Law,” said Jane.
Gaunt flung his heel across the mane,
And slithered from his horse and stamped.
“Boots tight,” he said, “my feet are cramped.”
A loose-shod horse came clicking clack;
Nick Wolvesey on a hired hack
Came tittup, like a cup and ball.
One saw the sun, moon, stars, and all
The great green earth twixt him and saddle;
Then Molly Wolvesey riding straddle,
Red as a rose, with eyes like sparks.
Two boys from college out for larks
Hunted bright Molly for a smile
But were not worth their quarry’s while. Courtesy Arthur Ackermann and Son, New York
Two eyeglassed gunners dressed in tweed
Came with a spaniel on a lead
And waited for a fellow gunner.
The parson’s son, the famous runner,
Came dressed to follow hounds on foot.
His knees were red as yew tree root
From being bare, day in day out;
He wore a blazer, and a clout
(His sweater’s arms) tied round his neck.
His football shorts had many a speck
And splash of mud from many a fall
Got as he picked the slippery ball
Heeled out behind a breaking scrum.
He grinned at people, but was dumb,
Not like these lousy foreigners.
The otter-hounds and harriers
From Godstow to the Wye all knew him. 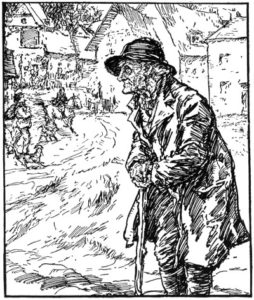 THE PLOUGHMAN (REYNARD THE FOX, 1920) by JOHN MASEFIELD
At twenty past, old Baldock strode His ploughman's straddle down…
Cresta Posts Box by CP