THE PETITION TO THE KING (Told on the Pagoda TALES OF BURMAH, 1895) by Mimosa 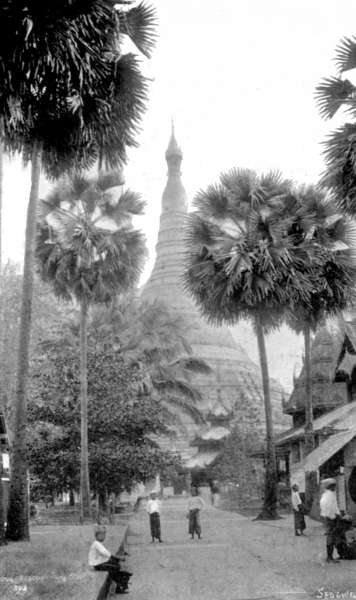 IN the reign of King Mindoon, who was the father of King Theebaw, a servant sent a petition to him in which he set forth that he had been his humble and faithful servitor before his accession to the throne, but now, although seven long years had gone by since then, he had remained forgotten and unnoticed. Continuing in this strain for a space, he ended with the following parable:—

In the Zita country there lived a King who had a son named Padoma, whom he sent to Thakada to be educated, and with him he sent a young attendant called Thomana.

For three years they stayed at Thakada, at the end of which period the Prince, having completed his studies, prepared to return home; on their way, travelling by easy stages, they paused at a small village situated in deep-wooded lands, where a great feast was being held. Hundreds of people had gathered there from all parts. A large tent was erected in one part, where a banquet was spread, to partake of which they humbly begged the Prince.

And he willingly accepted.

On the ground had been spread matting, on a part of which a gorgeously embroidered scarlet cloth with a golden fringe was put for the Prince, and a white one, less magnificently worked and with a silver fringe, for his friend and attendant Thomana.

When they had seated themselves, the rest of the company did likewise, remaining, however, at a distance, and separated by a cord.

Now Thomana was very learned in astrology, having read and thought deeply on that subject, and he knew as soon as he saw the Prince seat himself on the red cloth that he would become King upon that very day.

It was a brilliant assembly, every one clad in delicate silks of all hues, and glittering with jewels. The feast lasted long, it seemed, indeed, as if the constant succession of dishes was to be an endless one. All were in the best of spirits, and laughed and talked greatly.

When the Prince had finished his repast, he was shown into an inner tent, where a couch of the same royal colour had been placed, and in front was a slightly raised platform of bamboo, draped with violet and rose-pink satin, richly worked and lighted with lamps, that shed a subdued radiance round and about the little graceful figures of several dancing girls who had been bidden to dance for his royal highness.

Their dresses were so formed as to represent armour, and on their heads were similar coverings. They performed peculiar, dreamy, kind of movements, amidst a mist of varying hues. The Prince was much interested, and postponed retiring until late.

Thomana, having bidden his royal master good-night, felt disinclined for sleep, so, strolling into a park-like demesne that was adjacent, he seated himself under a large tree, whose branches spread for a considerable way, and became lost in thought.

It was a glorious night, with not a sound in the air save the soft whirr of some purpled-eyed or golden-winged insect as it floated by in the darkness. As he sat there musing on the events of the evening and the future of the Prince, two large leaves fell from above into his hand: one was old and withered, the other was fresh and green. “Ah,” he murmured, as he looked at them, “in the same way as an old and a young leaf drops from the tree, so may a man full of years and one who is in the morning of life die at the same time.”

In the midst of his meditations, which lasted long, he became a rahan, and was taken from the garden to the Gandremadana Mountains. At the same time a chariot of pearl, drawn by four pure white horses with trappings of gold, was on its way to the Prince to carry him back, as his father had died that day. Following the chariot came four ministers and a train of Court officials, accompanied by soldiers.

They awakened the sleeping Prince and acquainted him with their news. Then, when he was prepared, he stepped into the chariot that was waiting, and was borne with all speed to the palace, where he was proclaimed King the following day with the utmost pomp, ceremony, and rejoicings.

In his new life, and amidst his many duties and responsibilities, he entirely forgot the existence of his attendant, who had been his constant companion for three years; therefore his absence passed unrecorded and unnoticed; for what the King forgets the courtiers must never be unwise enough to remember.

At the end of thirty years, when the King was getting old, he remembered Thomana, and wondered greatly where he might be. Whereupon he immediately caused it to be made known throughout his dominions that he would give a lac of rupees to any one who should give him any news of his lost servant.

Now Thomana, owing to his great piety and powers of clairvoyance, became aware immediately of the fact that his old master had recollected him, and desired his presence. Therefore he went at once to the garden where he had been seated before he attained his rahanship so many years before. Close by the tree, under whose branches he had sat, were four shepherd boys, their flocks grazing near, while they themselves talked together of the big reward that the King had offered for news of his old servant.

Thomana, coming through the leafy aisles, heard them, and accosted them, declaring that he was the person whom the King desired. They rose and glanced at him doubtingly.

“Let two of you,” he said, “go to the palace and tell His Majesty, that I await him here.” To which they assented.

A short while passed, and then an immense carriage, glittering like gold and silver in the sun, and followed by others less imposing, could be seen coming rapidly along the white winding road. Pulling up at the entrance, the King himself alighted, and came through the gates, that were all brazen and blazoned, straight towards Thomana, his arms outstretched to embrace him; but he whom he would have greeted so cordially stopped him, saying—

“I am now a rahan; with men, their feelings, their passions, their brief triumphs, and sorrows, likes and dislikes, I have no affinity.” Then he folded his arms and stood in silence.

His face was very cold and still.

The King, looking at him, saw that he was poorly clad, and bent, and thin, and pressed him to return to the Court, where he promised him money and many wives.

But the rahan answered—

“I do not need wealth, nor any of the poor fleeting pleasures that this world can offer. Let your Majesty come with me instead, and visit my abode of rest.”

“What is it like, this place,” inquired the King in wonder, “that it can render its inhabitants indifferent to what we esteem the most desirable of all things in this life?”

“It is situated far from here,” replied Thomana, “and the approach to it is a broad, long avenue of gorgeous blossoms, such as you have never dreamed of, that bloom for ever, with a perfume that is at once dreamy, drowsy, and infinitely sweet; vast sprays of water spring from the mouths of silver dragons; over head the branches of trees interlace, showing but a strip of blue sky through their quivering leaves. For hours can you wander amongst these mazes of roses, this wonder of colour and beauty. At the end of the grove is situated an immense tree, larger than aught that you have seen and higher than any eye could reach. It is surrounded by columns of marble that glow like jewels. Here the nāts and fairies dwell, with nothing to disturb their seclusion and solitude save the sound of falling waters and the song of birds. While over all is cast such a spell as this life does not hold. Ah! beside the perfection of that world, how poor and valueless are the things of this! There one talks with the gods and dwells in worlds beyond the sun. There is no room for regrets or for desires. There every one is beautiful, therefore we do not covet beauty. There wealth is common to all, therefore we do not desire it. There all are equal, and love and goodness are the aim and end of all things. Come and see for yourself,” he added.

And the King, marvelling greatly at what he had heard, went. And there, in the midst of those divine surroundings, with naught to disturb the mind from the good, he wandered, awed and silent, but not afraid. In those cool, wide halls of bliss, all memories of grosser things and ways faded into nothingness. He forgot his kingdom, and was by it forgot. 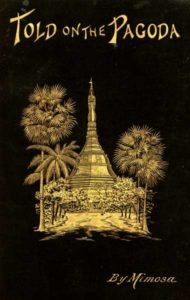 THE PRIEST’S PETITION (Told on the Pagoda TALES OF BURMAH, 1895) by Mimosa
IT was the custom for the heir to the throne…
Cresta Posts Box by CP