How the Monkey and the Goat Earned Their Reputations (Fairy Tales from Brazil, 1917) by Elsie Spicer Eells 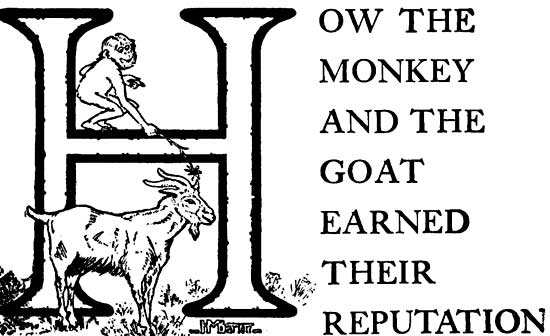 Once upon a time the tiger sent an invitation to the goat asking the goat to accompany him on a visit. The goat promptly accepted the invitation and at the appointed day they started on their journey to the house of the tiger’s friend. On the way there they came to a dangerous marsh. The tiger was afraid to cross it, but he pretended to be very brave. He said to the goat: “Friend Goat, how very pale you look when you think about crossing the marsh. Don’t be afraid. Just go ahead.”

The goat assured the tiger that he was no coward. He thrust out his chest and marched along toward the marsh like a brave soldier. As soon, however, as he stepped into the marsh, he fell into the mud and barely got through it alive. The tiger went around the marsh and walked on dry ground.

The tiger and the goat walked along and after going for some distance they saw a cobra lying in the path. “Friend Goat,” said the tiger, “here you have the opportunity to procure a beautiful necklace for your daughter, free of cost. Just pick it up and it is yours.” The goat started forward to pick up the snake, but the tiger told him to let it alone if he did not want to be killed.

When the tiger and the goat arrived at the house of the tiger’s friend it was very late. They soon went to bed in hammocks hung close together. At midnight the tiger rose quietly, walked on tip toe to the door, opened it, and went out. He hurried to the place where the sheep were kept, killed the fattest lamb of the flock, and had a feast. Then he went back to the hammock, wiped the blood on the goat, and went to sleep.

Early the next morning the host discovered that one of his lambs was missing. He hastened to the room where the tiger and the goat were sleeping and accused the tiger of having killed the lamb. The tiger looked up at him with an innocent expression and asked, “Do you see any blood on me?” There was no blood on the tiger, but the host looked into the next hammock and saw the goat all covered with blood. “I know now who killed my fattest lamb,” he said, and he gave the goat such a beating that the poor goat barely escaped with his life. From that day to this when one speaks of a person who has been easily imposed upon he calls him “the goat.”

Things happened very differently with the monkey. One day not long afterward the tiger invited the monkey to accompany him when he went to visit his friend. The monkey accepted, and the tiger and the monkey set out on the journey. When they came to the marsh the tiger said to the monkey, “Friend Monkey, how very pale you look when you think about crossing the marsh. Don’t be afraid. Just go ahead.”

“You go ahead yourself,” replied the monkey. The tiger went through the marsh and fell into the mud so that he was barely able to get out again. The monkey went around the marsh and walked on dry ground.

After a while the tiger and the monkey came to the banana trees. “Friend Monkey,” said the tiger, “aren’t you hungry? Let us stop here and eat some bananas. You climb up and pluck the bananas. Give the ripe ones to me and you may keep the green ones for yourself.” The monkey climbed up and picked the bananas but he ate all the ripe ones himself and threw the green ones down to the tiger. The tiger was forced to go hungry but the monkey had a good meal.

Finally the tiger and the monkey came to a cobra lying in the path. “Friend Monkey,” said the tiger, “here you have the opportunity to procure a beautiful necklace for your daughter, free of cost. Pick it up and it is yours.”

“Pick it up yourself,” replied the monkey.

When the tiger and the monkey arrived at the house of the tiger’s friend it was very late. They went to bed in hammocks hung up close together. The monkey had seen enough of the tiger that day to make him decide that he had better sleep with one eye open. Accordingly he pretended he was asleep, but he was really awake. At midnight he saw the tiger crawl quietly out of his hammock, walk on tip toe to the door, open it gently, and go out. The monkey decided to watch and see what happened when the tiger came back.

The tiger went to the place where the sheep were kept, killed the fattest lamb of the flock and had a feast. When he came back he tried to wipe the lamb’s blood on the monkey. The monkey saw him and gave him a push so that he spilled the blood all over himself and his own hammock. Not a single drop went on the monkey.

Early the next morning when the host missed one of his lambs he came to the room where his guests were sleeping. He saw the tiger all covered with blood and he cried, “O ho, I have at last caught the one who kills my lambs.” Then he gave the tiger such a beating that he barely escaped with his life. It was all he could do to crawl home again. 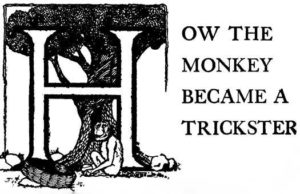 How the Monkey Became a Trickster (Fairy Tales from Brazil, 1917) by Elsie Spicer Eells
Once upon a time there was a beautiful garden in…
Cresta Posts Box by CP