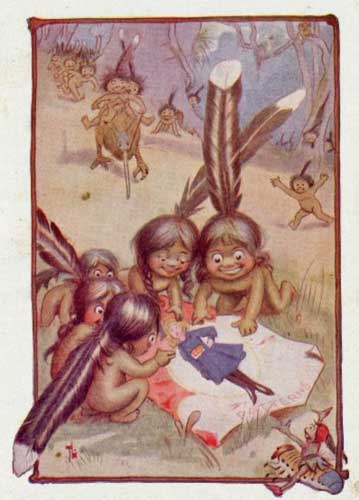 Long ago the Piccaninnies didn’t have a rag to their backs except a huia feather which they wore in their hair. They were the jolliest, tubbiest, brownest babies you ever saw with tiny nubbly knobs on their shoulders, as if they had started to grow wings and then changed their minds about it, and little furry pointed ears, as all wild creatures have. Only these were not wild, but very, very shy. Where did they live? Oh, just anywhere—all about; among the fern, in the long grass, down on the sands, in all the places babies love to roll about in. And then People began to come about, so tiresome! They began to make houses, sell things in shops, tear about in big boxes on wheels, and send great, clattering, shrieking,puffing monsters rushing through the country, dropping smoke and cinders like anything. There was such a clatter and a chatter, such gabbling and babbling, such hammering and banging and laughing and crying, and hurry and scurry and rush that it was enough to drive one crazy. There was such a fuss, the Piccaninnies simply couldn’t stand it, and they fled to the Bush. Well, wouldn’t you, with all that going on? And there they lived a long time. What fun they had swinging on the giant fern leaves, climbing the trees, chasing the fantails, riding the kiwis, who are very good-natured, though shy, and teasing the great, sleepy round-eyed morepork, who is so stupid and owlish in the daytime. And then People came into the Bush! Did you ever! The Piccaninnies took to the trees altogether then, and no wonder!

And then one day some one in a picnic party left a scrap of paper blowing about—you know the horrid way picnic parties have!—and a Piccaninny found it. “To be sure they were looking at the pictures upside down, but that made no real difference.”
As luck would have it, it was a girl Piccaninny; had it been a boy he would simply have torn it up and made paper darts with it to throw at the other boys, and no harm would have been done. But girls are different! “Teasing the great, sleepy, round-eyed morepork.”
She smoothed it out and looked at it carefully, and then she called the other girls to look at it. And soon there was such a clattering and chattering that the boys came racing that way to see if the girls had found anything good to eat. You know boys! The scrap of paper was a page out of a fashion book, and there were pictures on it of horrid little smug-faced boys in sky-blue suits bowling hoops in a way no real little boy ever bowled a hoop in his life, and simpering little girls in lace frocks holding dolls or sun-shades in un-natural attitudes. But the Piccaninnies were delighted. To be sure they were looking at the pictures upside down, but that made no real difference. They decided they must have clothes too. Of course the boys said pooh they wouldn’t! It’s much easier to slide down a fern-leaf, or jump off the end of a branch if you haven’t any clothes—everyone knows that. But when the girls, after being absent for hours, came back all in darling little crimson kilts made out of blossoms from the Christmas tree, the boys simply couldn’t bear to think the girls had something they hadn’t got. You know what boys are! After laughing at the girls in the hopes they’d throw away their pretty little frocks, the boys went off together. They simply had to think of something, and it would never do to copy the girls. They came back later with the quaintest little breeches, made out of broad flax leaves, stitched together with the points downwards. It was clever of the boys! They had also stuck some of the red-brown flowers in their hair. The girls were vexed that they hadn’t thought of that, but they went one better. They made strings of the scarlet nikau berries and hung them round their necks. (Trust the girls!) And that was how Fashions came to be started in the Bush. 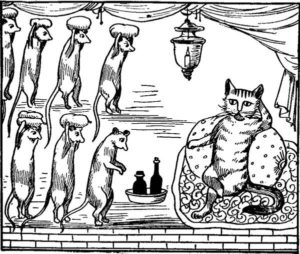 CAT AND MOUSE IN PARTNERSHIP (Grimm’s Kinder und Hausmärchen) by The Brothers Grimm
A certain cat had made the acquaintance of a mouse,…
Cresta Posts Box by CP